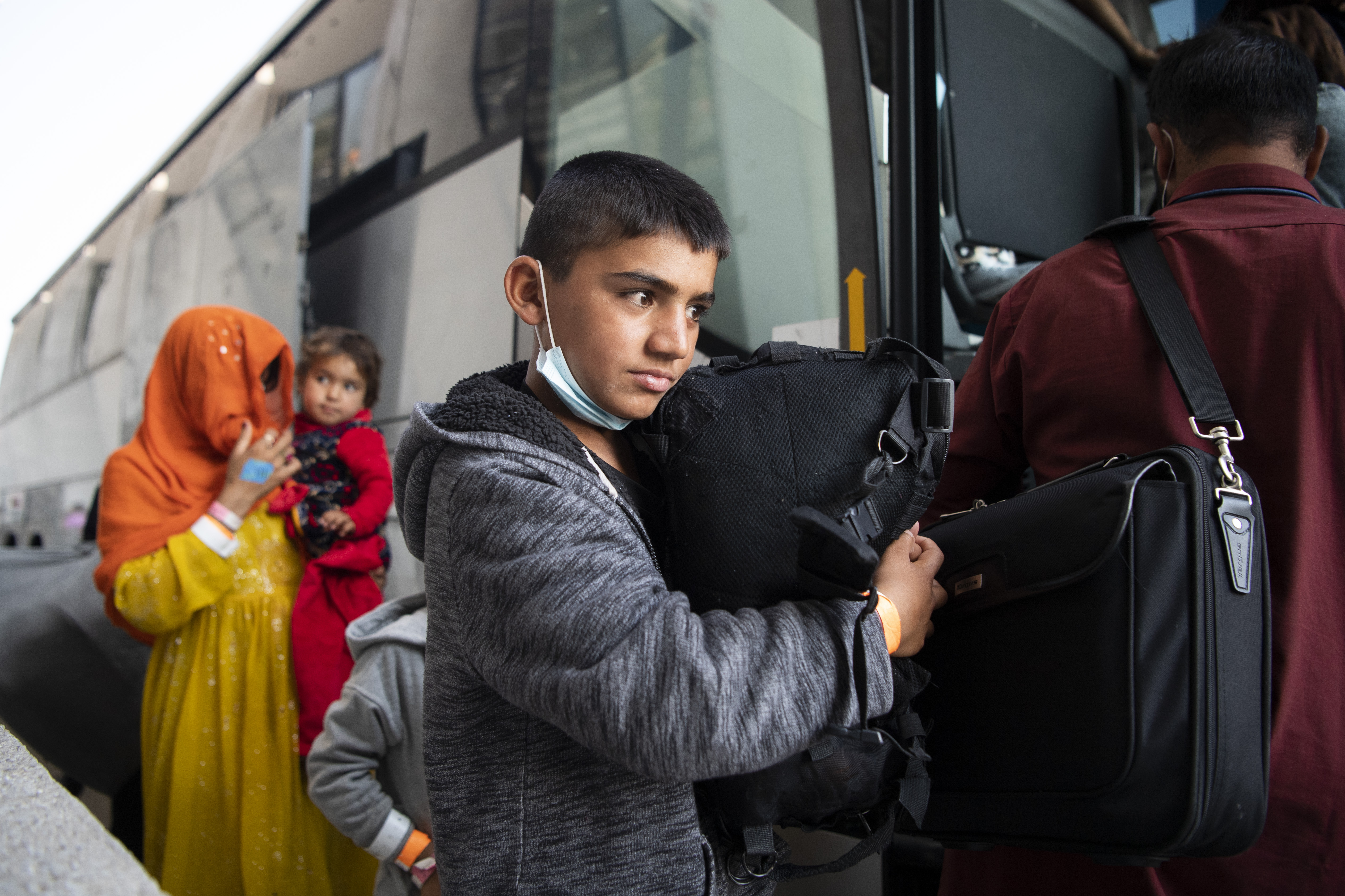 The two plastic picnic tables formed a V around the advocates resting on lawn chairs, bundled against the chill of early fall. They had spent two weeks sitting on the lawn outside the Capitol building, sandwiched between its marble pillars and Senate office buildings on the other side of the street. A coalition of organizations and activists, veterans and recent émigrés had run the station day and night, chatting with passing staffers and lawmakers. The Afghan and American flags, standing at the corners of the tables, fluttered in the breeze.

The goal of this vigil was simple: to urge Congress to pass the Afghan Adjustment Act, a bill that would end the legal uncertainty for tens of thousands of Afghans who evacuated to the United States after the chaotic withdrawal of American troops from Afghanistan last year. Introduced by a bipartisan group of lawmakers in August, the legislation would allow Afghans paroled into the U.S. to undergo additional vetting to apply for permanent legal residency.

“This is a bill for the Afghans who have arrived in the United States over the past year. This is a bill of national security. This is a bill for human rights,” Safi Rauf, a Navy veteran who served in Afghanistan and the president and founder of the Human First Coalition, told me on Tuesday afternoon outside the Capitol. (Rauf and his brother were held by the Taliban for 105 days after traveling to Afghanistan in November 2021 to provide humanitarian assistance; they were released in April after months of negotiation by the Biden administration.) “This is fulfilling our promise we made to our allies in Afghanistan who fought shoulder to shoulder with us over the last 20 years.”

Last year, American troops evacuated tens of thousands of Afghans from their native country and settled them in the U.S. using humanitarian parole, a specific designation that allows them to circumvent the cumbersome and backlogged asylum process. But humanitarian parole does not include a pathway to permanent residency, and it only applies for two years, meaning that many of these evacuees are trapped in legal limbo even as they struggle to adjust to life in the U.S.

Given the hashtag #FireWatch on Twitter, the vigil has attracted veterans who served in Afghanistan and advocates from across the country and overseas. Local Afghan Americans in the Washington metropolitan area have also participated; Joseph Azam, the board chair of the Afghan-American Foundation, told me about an Afghan American Uber driver who arrived after his shift ended at 2:30 a.m. because he wanted to sit with the activists until sunrise.

Advocates had hoped that the Afghan Adjustment Act would be included in the continuing resolution, commonly called a C.R., to keep the government funded through mid-December, which Congress will vote on at some point this week. But while the C.R. text has funding for resettling Afghan evacuees, it does not include any pathway for permanent residency.

“It seemed like a really good time to take care of this. Especially because with every passing day or week, people’s lives were at risk. People are losing their lives. People are losing hope,” Azam said on Wednesday morning. Along with streamlining the path to permanent residency, the bill would also expand the special immigration visa, or SIV, program to include previously omitted groups that aided the U.S. military and would establish a task force to aid Afghans eligible for SIVs.

Senator Chris Coons, one of the co-sponsors of the bill in the Senate, told me on Tuesday that he was disappointed that it had not been included in the C.R. He alluded to opposition from some Republicans worried that the vetting requirements are not stringent enough, saying, “There’s a number of senators who misunderstand its structure and purpose.”

Earlier this month, the inspector general for the Department of Homeland Security released a report finding that “DHS encountered obstacles to screen, vet, and inspect all Afghan evacuees,” and “U.S. Customs and Border Protection (CBP) did not always have critical data to properly screen, vet, or inspect the evacuees.” This comes after a February report by the inspector general for the Defense Department found that evacuees “were not vetted by the National Counter Terrorism Center (NCTC) using all DoD data prior to arriving” in the country.

“Congress should not consider sweeping status immigration changes for evacuees unless and until this administration guarantees the integrity of and fully responds to long-standing oversight requests regarding their vetting and resettlement process. Anything less would be irresponsible,” GOP Senator Chuck Grassley said in a statement earlier this month.

However, supporters are quick to note the bill includes additional vetting, as well as the requirement that an applicant live in the U.S. for two years. “This is not an immigration bill. This is not a bill for people to find an easy way to emigrate here,” Rauf told me.

Senator Lindsey Graham, one of the Republican co-sponsors of the bill, told me on Tuesday that he believed it may be included in this year’s National Defense Authorization Act or an omnibus funding bill at the end of the year if the provisions on vetting were tightened. “We’ve still got some work to do,” Graham said. But “if we can get the vetting process in better shape,” he said, he believed it could get the necessary 10 GOP votes to overcome a filibuster.

As lawmakers inside the Capitol mull the fate of thousands of evacuees in legal limbo, the advocates waiting outside continue to raise awareness for their cause. Jon Stewart, who has done significant advocacy work before Congress on behalf of veterans, checked in with the crew staffing the tables on Tuesday, noting the “moral injury” of being unable to evacuate and then protect the Afghan allies who supported U.S. troops.

A few members of Congress have dropped by over the past two days, among them Democratic Senator Dick Durbin, GOP Representative Michael Waltz, and Coons. “He sounded surprised that it’s as difficult as it is,” Azam said about the conversation with Coons. “What we talked to him about was like, this actually should be and could be a Republican bill.”

This echoed what Coons told me on Tuesday: “I believe this is the best way for us to accomplish the goal of doing right by the Afghans who fought alongside us, and coming up with a process and incentives for them to come forward and be fully vetted,” he said. “[There are] some differences of opinion with colleagues about whether it accomplishes that or not, but I think the more they dig into the details and have a dispassionate conversation about the bill, particularly with veteran advocates, the more co-sponsors it will have.”

The advocates who have spent 14 days outside of the Capitol plan to continue their campaign until the bill is passed. Azam noted that Congress is expected to recess for several weeks in October and suggested that the campaign could follow members to their individual states and districts.