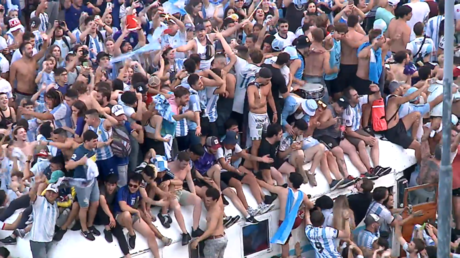 Overjoyed Argentinians took to the streets in their thousands on Sunday as they celebrated wildly after Lionel Messi led the team to the title at the 2022 FIFA World Cup in Qatar.

Argentina ended a 36-year wait for football’s biggest prize, defeating defending champions France on penalties at the Lusail Stadium after a pulsating game had ended 3-3.

The winning spot kick was struck by defender Gonzalo Montiel at just before 9pm local time in Qatar – triggering raucous celebrations thousands of miles away in South America.

Footage showed the streets of Buenos Aires flooded with masses of fans, many of whom were decked out in the traditional national team colors of sky blue and white.

Banners were displayed featuring late Argentina football icon Diego Maradona, who before Sunday had been the last man from his country to lead the team to World Cup glory.

Incredible drone footage showed the scenes around the famous Obelisco landmark surrounded by thousands of fans in downtown Buenos Aires.

Celebrations continued into the night with fireworks illuminating the sky as the football-mad nation marked its third triumph at the biggest tournament in the sport, following successes in 1978 and 1986.

Biden and Xi are assembly in Bali. Here are the high-stakes points on the agenda