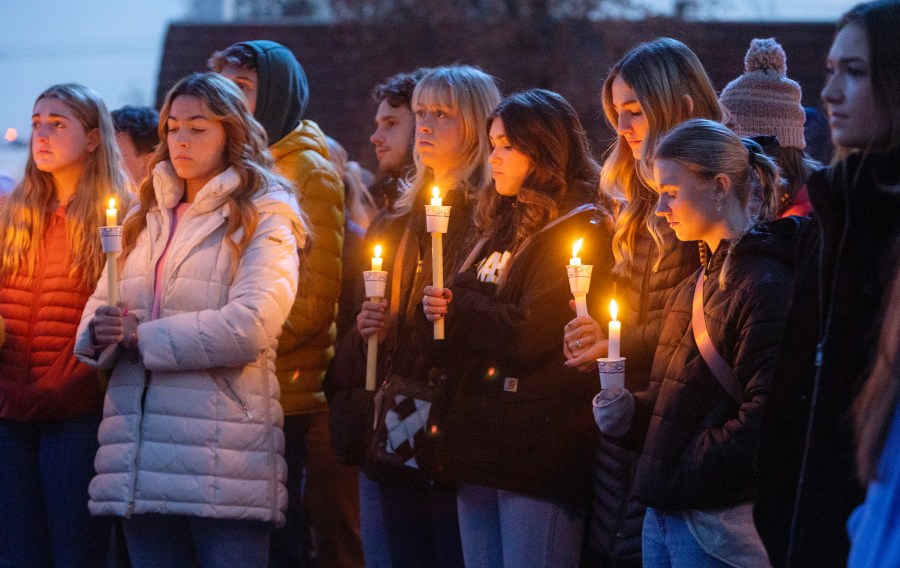 BOISE, Idaho (AP) — The fatal stabbings of four students at the University of Idaho shook the college town of Moscow, a small community nestled in the rolling agricultural hills of the Palouse region that hadn’t seen a murder for five years.

The Nov. 13 slayings seemed to mystify police, adding to the tension in town as the weeks went by without a break in the case. Then on Friday a suspect was arrested more than 2,500 miles (4,000 kilometers) away in Pennsylvania.

Bryan Christopher Kohberger, 28, was taken into custody in the early morning by the Pennsylvania State Police at a home in Chestnuthill Township, authorities said. Latah County, Idaho, Prosecutor Bill Thompson said investigators believe Kohberger broke into the students’ home “with the intent to commit murder.”

DNA evidence played a key role in identifying Kohberger as a suspect in the killings and authorities were able to match his DNA to genetic material recovered during the investigation, a law enforcement official said. In recent days, federal investigators had been watching Kohberger.

Kohberger is a Ph.D. student in the Department of Criminal Justice and Criminology at Washington State University, which is near the University of Idaho. He also is a teaching assistant for the university’s criminal justice and criminology program, according to a WSU’s online directory.

The official could not publicly discuss details of the ongoing investigation and spoke to The Associated Press on condition of anonymity.

Kohberger is being held without bond in Pennsylvania and will be held without bond in Idaho once he is returned, Thompson said. The affidavit for four charges of first-degree murder in Idaho will remain sealed until he is returned, the prosecutor said. He is also charged with felony burglary in Idaho. An extradition hearing is scheduled for Tuesday.

The students — Kaylee Goncalves, Madison Mogen, Xana Kernodle and Ethan Chapin — were stabbed to death at a rental home near campus in Moscow, a town of about 25,000 people near the Washington state border.

Moscow Police Chief James Fry said investigators are still looking for a weapon. He was emotional as he announced the arrest at a news conference Friday, calling the victims by their first names.

Tips began pouring in after law enforcement asked the public for help finding a white Hyundai Elantra sedan seen near the home around the time of the killings.

In addition to the DNA evidence, authorities also learned Kohberger had a white Hyundai Elantra, the official who spoke anonymously said.

No lawyer for Kohberger was listed in court documents and phone calls to the county public defender’s office went answered Friday.

WSU and UI are partners in several academic programs and students sometimes attend classes and seminars or work at the neighboring schools. That doesn’t appear to be the case with Kohberger: University of Idaho President Scott Green wrote in a memo to students and employees on Friday evening that the Idaho school had no record of him.

In the memo, Green said the arrest was “the news we have been waiting for.”

Green said he was grateful for the law enforcement agencies, including the Idaho State Police troopers who were brought in to help patrol the university and the community in the weeks after the stabbings.

“The crime has nevertheless left a mark on our university, our community and our people,” Green wrote. Counseling services would remain available to students throughout the winter break and after classes resume on Jan. 11, he said.

Kohberger graduated from Northampton Community College in Pennsylvania with an associate of arts degree in psychology in 2018, said college spokesperson Mia Rossi-Marino. DeSales University in Pennsylvania said that he received a bachelor’s degree in 2020 and completed graduate studies in June 2022.

Goncalves, 21, of Rathdrum, Idaho; Mogen, 21, of Coeur d’Alene, Idaho; Kernodle, 20, of Post Falls, Idaho; and Chapin, 20, of Conway, Washington, were members of the university’s Greek system and close friends. Mogen, Goncalves and Kernodle lived in the three-story rental home with two other roommates. Kernodle and Chapin were dating and he was visiting the house that night.

Autopsies showed all four were likely asleep when they were attacked. Some had defensive wounds and each was stabbed multiple times. There was no sign of sexual assault, police said.

Shanon Gray, an attorney representing Goncalves’s father, Steve Goncalves, said law enforcement officials called the family Thursday to let them know about the arrest, but gave no additional information about how or why they believe he might be connected to the killings.

Ben Roberts, a graduate student in the criminology and criminal justice department at WSU, described Kohberger as confident and outgoing, but said it seemed like “he was always looking for a way to fit in.”

“I had honestly just pegged him as being super awkward.” Roberts said.

Roberts started the program in August — along with Kohberger, he said — and had several courses with him. He described Kohberger as wanting to appear academic.

“One thing he would always do, almost without fail, was find the most complicated way to explain something,” he said.

“To describe it as a relief is pretty much spot on,” said Brian Wolf, a UI sociology professor who specializes in criminology and social control. “It’s still somber, because we lost four members of our University of Idaho family, but it’s safe to say we will probably all sleep better tonight.”

South Carolina Primary Guide: How to Vote and What’s on the Ballot

Man, in his 20s, dies after being shot by armed Met police officers during chase in south London