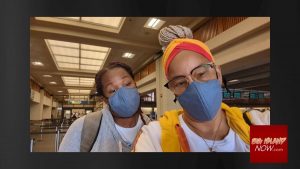 Joslyn Saunders had planned to spend the African-American holiday Kwanzaa in Kona with her 36-year-old daughter.

But like tens of thousands of people across the United States, she was a passenger of one of the approximately 15,700 Southwest Airlines flights that have been canceled since winter weather began disrupting air travel on December 22.

“The agent I spoke to today wasn’t sure those wouldn’t be canceled,” she said. “I hope Saturday’s flights go as planned.”

Southwest Airlines said most of the disruptions were due to proactive schedule adjustments to ensure safe operations, to protect the integrity of the entire Southwest Network, and to limit prolonged exposure in dangerous working conditions.

Saunders, who lives in O’ahu, has been loyally flying with Southwest for the past two years to provide care for her mother who lived in Houston, Tex. She said the Dallas-based airline offered the best prices.

Saunders’ mother passed away unexpectedly in July at the age of 97.

“I wanted to enjoy Kona with my daughter as this was my first Christmas without my mom and this season was especially hard,” she said. “I wanted to get away for the day, and we love Kona.”

But Southwest still has major problems to fix. On Wednesday, the airline said it planned to operate a reduced schedule by flying roughly one third of its flights for the next several days in an effort to reposition staff and planes.

According to the tracking site FlightAware, most of the canceled Southwest flights are coming out of Denver International Airport. But the Big Island also is feeling the impacts of the travel chaos.

“We’re making headway and we’re optimistic to be back on track before next week,” Jordan said. “We have some real work to do to make this right.”

The tools Southwest uses to recover from disruption, Jordan says “serve us well 99% of the time, but clearly, we need to double down on our already existing plans to upgrade systems for these extreme circumstances so that we never again face what’s happening right now.”

Southwest has implemented a site where customers can contact the airline to rebook or request a refund: Southwest.com/traveldisruption. Teams are finalizing a resource to provide additional assistance to customers to reunite with lost or missing baggage.

Additionally, a Travel Advisory for irregular operations is still in effect to offer customers maximum flexibility with rebooking.