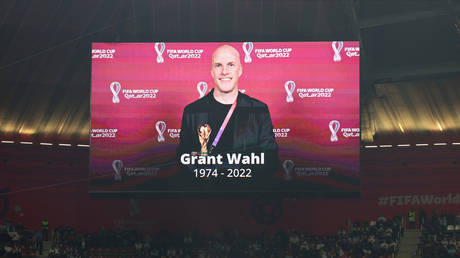 The body of American soccer reporter Grant Wahl arrived in the US on Monday, the US State Department has confirmed.

Through spokesperson Ned Price, the department reported that the 49-year-old’s remains arrived at New York’s John F. Kennedy Airport at 8:30am and were accompanied by an official representing the US Embassy in Doha.

Price said that US ambassador Timmy Davis had been in constant contact with Wahl’s family, with the embassy working to fulfill their wishes since Wahl passed away.

Wahl, who was a well-known professional in his field, collapsed in the press box at the Lusail Stadium when covering the World Cup quarterfinal between Argentina and the Netherlands.

After receiving CPR on-site by paramedics, he was taken to hospital where he was later pronounced dead, according to a spokesperson for Qatar’s Supreme Committee for Delivery and Legacy.

US Secretary of State Antony Blinken used Twitter to send condolences to Wahl’s family as his body arrived home, saying that he “so appreciated” the Kansas native “whose writing captured not only the essence of the beautiful game but also the world around it.”

I so appreciated Grant Wahl, whose writing captured not only the essence of the beautiful game but also the world around it. I send my deepest condolences to his family, and thank our Embassy team and Qatari partners who worked together so effectively to fulfill their wishes.

Wahl’s cause of death is still unknown. Last week, he posted on his personal website that he was given antibiotics and told he was most likely suffering from bronchitis by on-site medical personnel at the World Cup.

He had claimed that his body “finally broke down on me” after “three weeks of little sleep” and “high stress.”

“What had been a cold over the last 10 days turned into something more severe on the night of the USA-Netherlands game, and I could feel my upper chest take on a new level of pressure and discomfort,” Wahl explained.

Wahl’s wife, Dr. Celine Gounder, tweeted on Friday that the news had come as a “complete shock” to her.

But Wahl’s brother alleged foul play after the journalist had worn a pro-LGBTQ shirt to the US men’s national team’s opening group match against Wales.

“I do not believe my brother just died,” Eric Wahl, who is gay, said. “I believe he was killed.”

Eric Wahl has since apologized “unequivocally” for the accusations on Twitter, after a Qatari user said he hoped Wahl would say sorry for his initial reaction “that stems from racism” once he got confirmation from US medical doctors about the cause of death.

“My initial statement stemmed from two things, neither of which [are] related to racism,” Wahl added. “Concerning things Grant told me, and well-known corruption.”

Grant Wahl said he was briefly detained, while informed that the shirt was “not allowed” in the Al-Rayyan Stadium.

1 thought on “Body of US soccer journalist returned from Qatar”