Forty-five years after Pelé played his last game, it’s hard to imagine modern soccer, or Brazil, without him.

Geovana Sarmento, 17, waited in the three-hour line to view his body as it lay in repose at the stadium where he played for most of his career. She came with her father, who was wearing a Brazil shirt with Pelé’s name.

“I am not a Santos fan, neither is my father. But this guy invented Brazil’s national team. He made Santos stronger, he made it big, how could you not respect him? He is one of the greatest people ever, we needed to honor him,” she said.

Pelé will be buried Tuesday in the city where he grew up, became famous, and helped make into a global capital of soccer. A Catholic Mass will be celebrated at the Vila Belmiro stadium before his casket is ushered through the streets of Santos to a nearby cemetery.

Brazil’s newly inaugurated President Luiz Inácio Lula da Silva, who was sworn in for a third term Sunday after a comeback victory, paid his respects at Vila Belmiro.

The soccer great died Thursday at age 82 after a battle with cancer. He was the only player ever to win three World Cups.

Thousands of mourners, including high school students and supreme court justices, filed Monday past the body of Pelé on the century-old field where he made his hometown team one of Brazil’s best. Pelé’s coffin, draped in the flags of Brazil and the Santos FC football club, was placed on the midfield area of Vila Belmiro.

Lula arrived at 9 a.m. and took part in a Catholic Mass as fans continued to walk past the coffin, and expressed his condolences to Pelé’s widow, Marcia Aoki, holding her head between his hands. He left 30 minutes later.


Brazilians Mourn Pelé at the Stadium Where He Got His Start

The storied 16,000-seat stadium was surrounded by mourning fans, and covered with Pelé-themed decorations inside. Fans coming out of the stadium said they’d waited three hours in line, standing under a blazing sun.

Caio Zalke, 35, an engineer, wore a Brazil shirt as he waited in line. “Pelé is the most important Brazilian of all time. He made soccer important for Brazil and he made Brazil important for the world,” he said.

In the 1960s and 70s, Pelé was perhaps the world’s most famous athlete. He met presidents and queens, and in Nigeria a civil war was put on hold to watch him play. Many Brazilians credit him with putting the country on the world stage for the first time.

Rows of shirts with Pelé’s number 10 were placed behind one of the goals, waving in the city’s summer winds. A section of the stands was filling up with bouquets of flowers placed by mourners and sent by clubs and star players — Neymar and Ronaldo among them — from around the world as loudspeakers played a song named “Eu sou Pelé” (“I am Pelé”) that was recorded by the Brazilian himself.

The crowd was mostly local, although some came from far away. Many mourners were too young ever to have seen Pelé play. The mood was light, as people filtered out of the stadium to local bars, wearing Santos FC and Brazil shirts.

Claudio Carrança, 32, a salesman, said: “I never saw him play, but loving Pelé is a tradition that goes from father to son in Santos. I learned his history, saw his goals, and I see how Santos FC is important because he is important. I know some Santos fans have children supporting other teams. But that’s just because they never saw Pelé in action. If they had, they would feel this gratitude I feel now.” 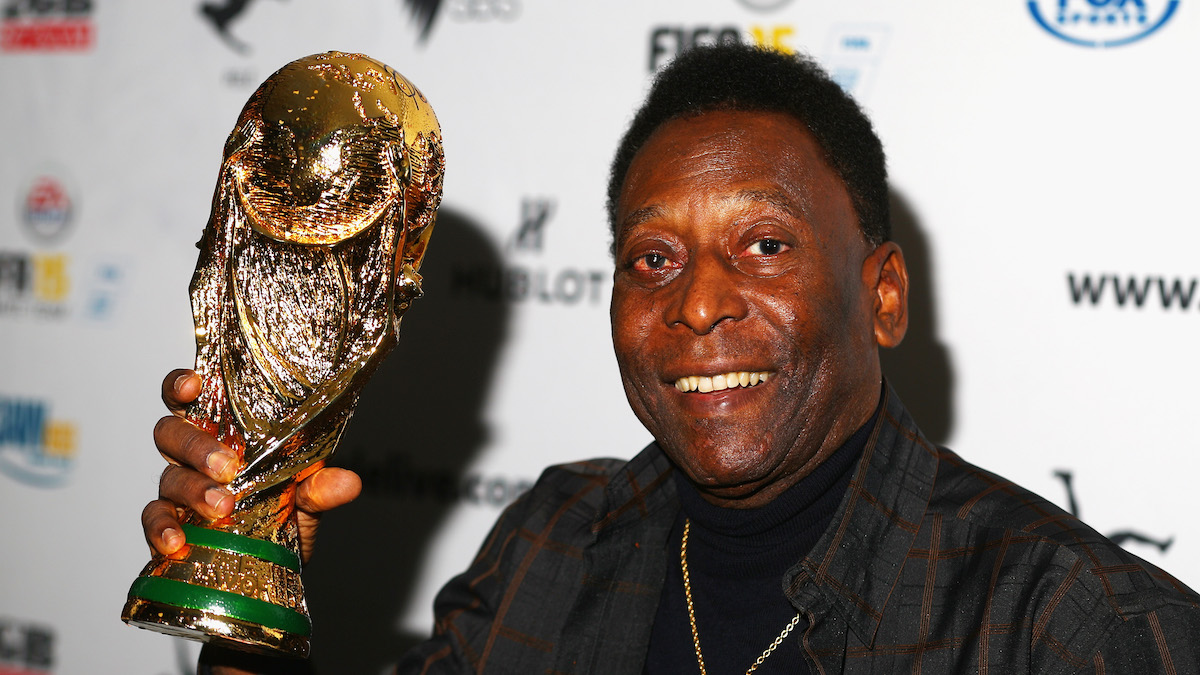 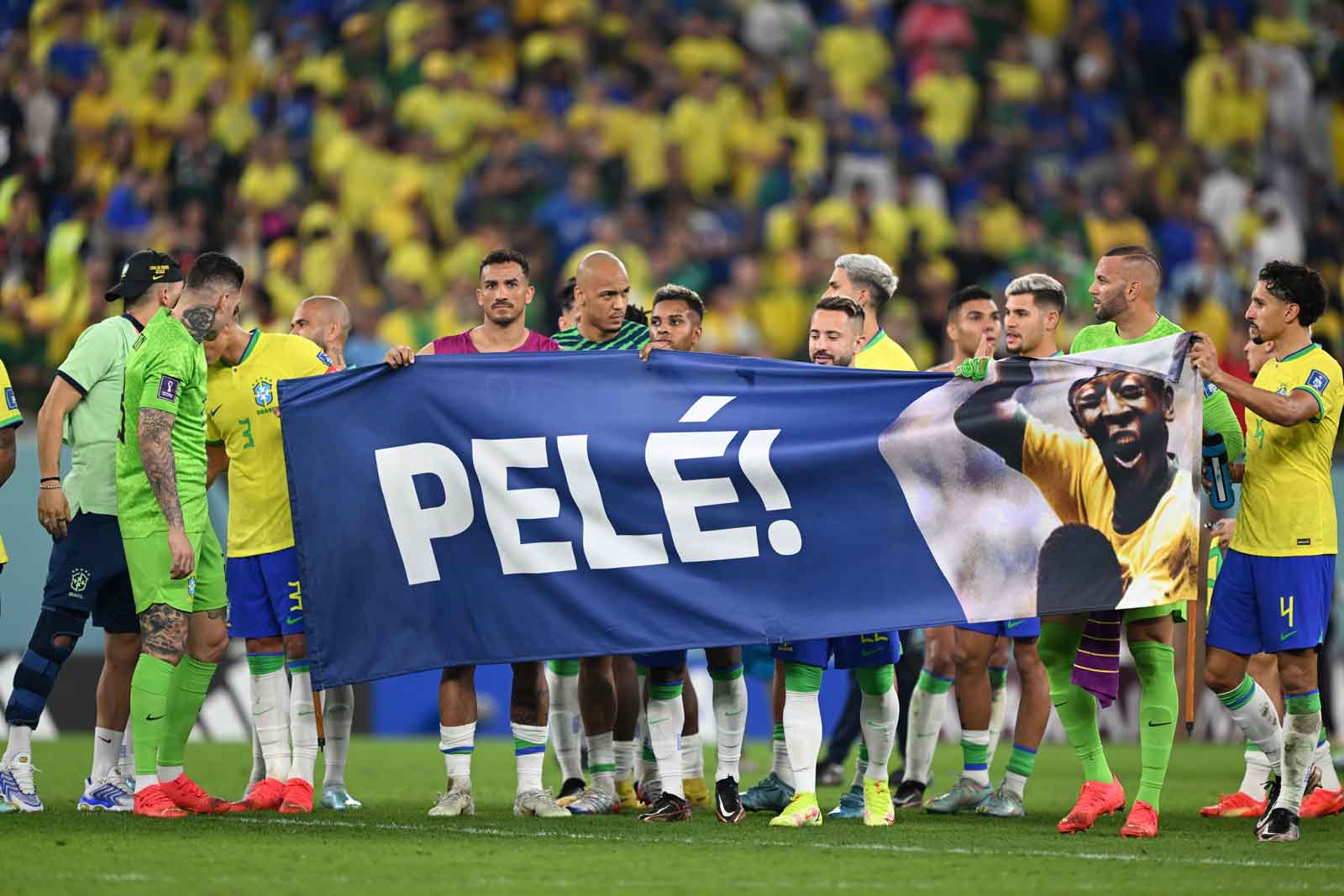 Among those at the stadium was Pelé’s best friend Manoel Maria, also a former Santos player.

“If I had all the wealth in the world I would never be able to repay what this man did for me and my family,” Maria said. “He was as great a man as he was as a player; the best of all time. His legacy will outlive us all. And that can be seen in this long line with people of all ages here.”

FIFA President Gianni Infantino told journalists that every country should name a stadium after Pelé.

“I am here with a lot of emotion, sadness, but also with a smile because he gave us so many smiles,” Infantino said. “As FIFA, we will pay a tribute to the ‘King’ and we ask the whole world to observe a minute of silence.”

Another fan and friend in line was Brazilian Supreme Court Justice Gilmar Mendes.

“It is a very sad moment, but we are now seeing the real meaning of this legendary player to our country,” Mendes told journalists. “My office has shirts signed by Pelé, a picture of him as a goalkeeper, also signed by him. DVDs, photos, a big collection of him.”

Pelé had undergone treatment for colon cancer since 2021. The medical center where he had been hospitalized said he died of multiple organ failure as a result of the cancer.

Pelé led Brazil to World Cup titles in 1958, 1962 and 1970 and remains one of the team’s all-time leading scorers with 77 goals. Neymar tied Pelé’s record during this year’s World Cup in Qatar.