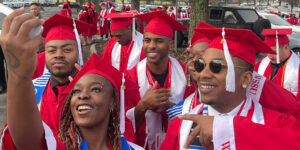 Chris Paul capped an impressive, but chaotic 12-hour window with an incredible gesture on Friday. The 37-year-old point guard gifted his fellow graduates of Winston-Salem State University with $2,500 each.

On Thursday night, the Suns traveled to Los Angeles for a road game against the Clippers. Paul had 15 points, 13 assists and seven rebounds in a 111-95 win.

Not long thereafter, the 12-time All-Star hopped on a plane and traveled to North Carolina to walk the stage at graduation. He and several family members took a private jet from Van Nuys, California to Winston-Salem and arrived at about 6:30 a.m. ET.

Paul pulled up rocking some fresh custom Jordan sneakers and picked up his degree in mass communications on Friday morning.

As could be expected, his presence caused quite the stir.

When his name was called, the crowd went nuts. His reception was just a little bit louder than the others.

Paul, who played college basketball for two seasons from 2003-05, returned to school in 2020. He thought it was important to highlight HBCU culture and chose to do so at Winston-Salem State.

Considering that he has a full-time job with the Suns, Paul completed most of his degree online. When asked why he chose to go back to school, his answer was profound and stemmed from a sense of normalcy.

If walking the stage at an HBCU wasn’t cool enough, Chris Paul went one step further.

He gifted the rest of his graduating class with $2,500 per student.

It was a small token of his gratitude to Winston-Salem State, and also spoke to his value in education. The money will help his classmates get started as they begin their “adult lives” and careers.

To make things even crazier, Paul’s journey wasn’t done. He got back on a plane on Friday afternoon and traveled home to Phoenix. The Suns host the Pelicans on Saturday.