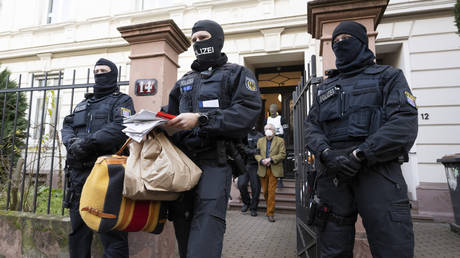 Authorities have detained 25 people, including ex-police and military personnel, who allegedly wanted to reinstate a monarchy

SWAT deployments, more than 130 searches and a total of 25 arrests have been carried out in Germany and several neighboring countries in what the media is calling one of the largest counter-terrorist operations in the nation’s history.

The suspects include former members of the military and police force, as well as a Russian national. They are believed to have conspired to depose the current government by force, and reinstate a regime modeled on the German Reich of 1871.

In the early hours of Wednesday, some 3,000 German police officers stormed apartments located in 11 of the country’s regions, authorities revealed.

The group members are said to be adherents of the QAnon ideology, who believe Germany is currently being controlled by the ‘deep state’.

Having started their preparations for a coup back in November 2021, the suspects formed a ‘military wing,’ and were actively attempting to recruit military personnel currently serving in the Bundeswehr.

The conspirators also allegedly formed a shadow cabinet, planning to put a nobleman from Frankfurt, Prinz Heinrich XIII, at the helm for an interim period following the coup.