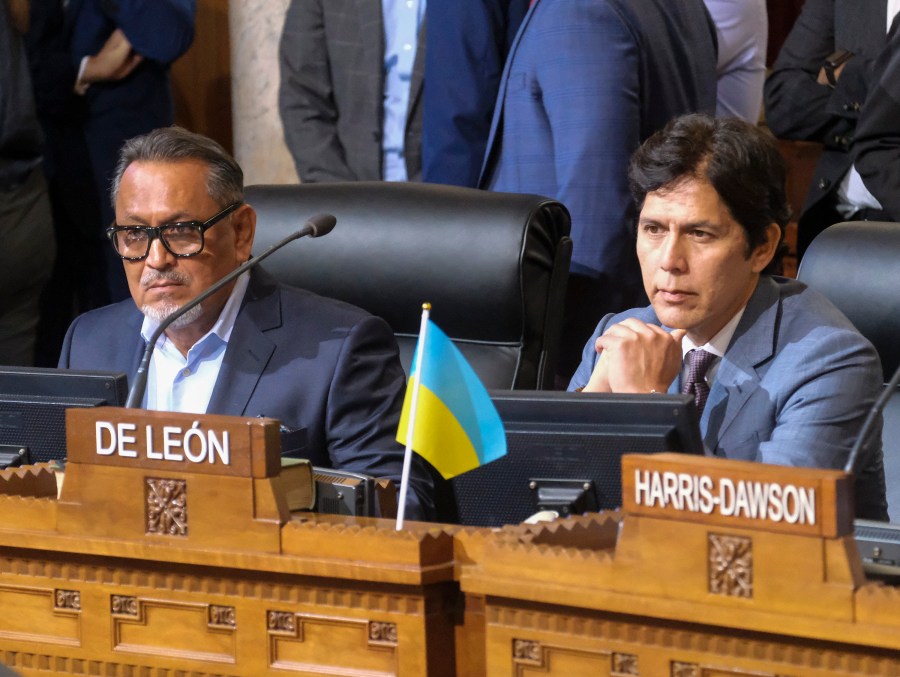 LOS ANGELES (AP) — Two months after becoming entangled in a racism scandal that shook public trust in Los Angeles government, disgraced City Councilman Kevin de Leon has refused calls to resign and is attempting to rehabilitate his reputation as he faces a politically uncertain future.

De Leon, a former state legislator, is one of two council members who have resisted calls from President Joe Biden to step down, while continuing to collect annual salaries of nearly $229,000 — among the most lucrative paydays for city council members in the nation.

The other is Councilman Gil Cedillo, who vanished from public view soon after the scandal over a leaked recording of racist insults emerged in October and has not attempted to return to City Hall meetings.

Cedillo lost a reelection bid earlier this year and his term expires Monday at 12:01 a.m.

Stripped of his ability to participate in council committees, facing widespread pressure to resign and after an extended absence from council meetings, de Leon has been maneuvering in public and private to emerge from political purgatory, despite being reviled by colleagues who say they cannot work with him.

His situation deteriorated Friday, when he scuffled with an activist who heckled him at a holiday toy giveaway that was partially captured on video and posted on Twitter. The confrontation left children at the event in tears.

Council President Paul Krekorian, who has called on de Leon to step down, said in a statement that the councilman, one of his staff members and a volunteer were attacked and he called it intolerable. The Los Angeles Times reported that activists said de Leon was the aggressor.

“This city has endured horrendous division and toxicity in recent months,” Krekorian said. “We need to reject hatred in all of its forms and we need to reject the atmosphere of intimidation, bullying and threats.”

De Leon appeared Friday at his first council meeting since mid-October, setting off a chaotic protest between competing factions in the audience. About a dozen protesters bellowed at de Leon to leave the ornate chamber, while his supporters chanted “Kevin, Kevin.”

Some council members walked out and police ejected two people, fearing they might fight.

“Leave, Kevin!,” one protester shouted at de Leon. “This is why these meetings need to be shut down.”

The scandal triggered the resignation in October of then-City Council President Nury Martinez and a powerful labor leader, Ron Herrera, along with calls from Biden and other elected officials for de Leon and others to resign.

The uproar was triggered by a leaked recording of crude, racist comments from a year-old meeting involving Martinez, Herrera, de Leon and Cedillo — all Latino Democrats — in which they plotted to expand their political power at the expense of Black voters during a realignment of district boundaries.

The once-a-decade redrawing of district lines can pit one group against another to gain political advantage in future elections.

The California Legislative Black Caucus has said the recording “reveals an appalling effort to decentralize Black voices during the critical redistricting process.” A long line of speakers at Council meetings that followed said it echoed the Jim Crow era and was a stark example of “anti-Blackness.”

De Leon has apologized repeatedly but said he will not resign. He argues that he wants to continue working on homelessness, fallout from the pandemic and the threat of evictions for renters in his district, which includes downtown Los Angeles and the heavily Latino Boyle Heights neighborhood.

There is no legal avenue for his colleagues to remove him — the council can only suspend a member when criminal charges are pending.

Krekorian, the council president, has said “the only way we can begin to heal as a city is for Mr. de Leon to take responsibility for his actions, accept the consequences and step down.”

While de Leon has largely stayed away from City Hall, he has continued to quietly conduct business, including attending holiday events and meeting officials on pending homeless projects and illegal dumping problems.

With his appearance at the council meeting Friday, it’s clear he is trying to gradually step back into the public sphere. Meanwhile, organizers behind an effort to recall him from office have been cleared to collect petition signatures needed to qualify the proposal for the ballot.

Council members also have received a spate of letters from people identifying as de Leon’s constituents, defending him and urging the council to let him resume his duties. They also asked the council to refrain from any additional punishment, which is being considered and could include restricting de Leon’s office funds.

Continuing fallout from the racism scandal is one challenge that will confront the city’s new mayor, Democrat Karen Bass, when she takes office on Monday. Meanwhile, three other current or former Council members have been indicted or pleaded guilty to corruption charges.

G7 summit kicks off in Germany