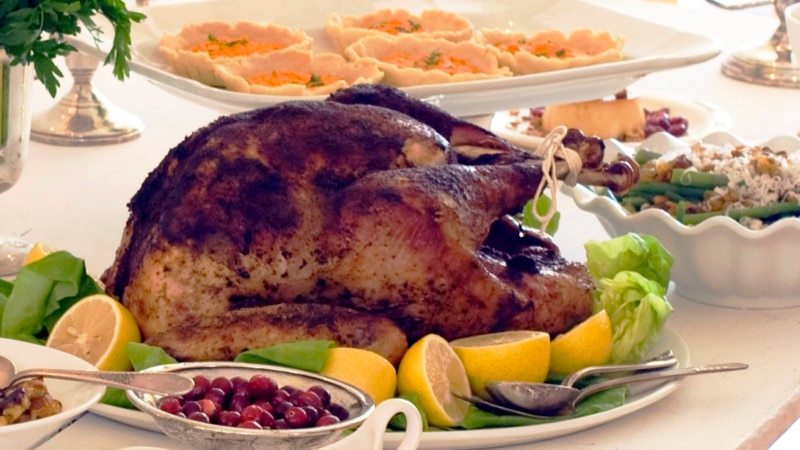 Let the sticker shock begin: The upcoming U.S. Thanksgiving holiday, a time when families and friends typically celebrate with groaning sideboards, a stuffed turkey, and a more-is-better-than-less attitude, is going to cost roughly 20% more than last year, according to estimates compiled by the American Farm Bureau Federation in an annual survey of grocery prices.

Blame it on the weather, Russia’s invasion of Ukraine or corporations’ drive to maximize profits, all of which have had a hand in rising food prices, but this year’s jump is the largest since the Farm Bureau’s first Thanksgiving dinner cost survey in 1986.

Coupled with last year’s 14% increase, which was the second-largest, the price of a “classic” meal of turkey, stuffing, green peas, sweet potatoes, cranberries, rolls and pumpkin pie for 10 people has risen more than a third since 2020, at the outset of the worst U.S. inflation surge in 40 years, from $46.90 to $64.05.

“That kind of increase we recognize is a burden on some families, no question about that,” said Roger Cryan, the Farm Bureau’s chief economist, though he noted that discounting as the holiday approaches may allow consumers to lower the bill.

U.S. consumer prices rose 7.7% on an annual basis in October and had been increasing by as much as 9.1% earlier this year, triggering a Federal Reserve effort to tame price pressures with aggressive interest rate increases.

Food prices, particularly items bought for home consumption, have risen even faster, hitting a 13.5% annual rate in August and still rising 12.4% annually last month, a shock to one part of the household budget where prices had dependably increased less than incomes.

As food prices have risen, a U.S Census survey showed the share of households reporting food scarcity rising from 7.8% in August 2021 to 11.4% as of early October.

“If you’re in the grocery store right now, you see it, in any grocery store you go to, people making tradeoffs,” San Francisco Fed President Mary Daly said last week. “How many people can they invite? What are they going to serve? Are they going to trade down? Are we having a different kind of meal? Are we not having as many options?”

As with other goods and services, there is a broad set of forces behind the Thanksgiving food spike.

An outbreak of avian flu cut turkey flocks, and while supply is adequate the Farm Bureau said the harvest of smaller birds along with higher feed prices has raised the cost of that Thanksgiving centerpiece by 21%, to an average $1.81 per pound in the 224 stores where surveyors checked prices during the Oct. 18-31 period.

For food items generally, key inputs like fuel and fertilizer prices have skyrocketed, said Wendiam Sawadgo, an agricultural economics professor at Auburn University, with some fruit farmers in Alabama, for example, now spending $1,000 an acre on fertilizer compared to around $600 in 2018.

“A big chunk was Ukraine and Europe not having fertilizer production for a good while. That was a big problem,” he said.

Grocery store margins also rose during the COVID-19 pandemic. Net profit after taxes hit 3% in 2020 and 2.9% in 2021, compared with an average of around 1.2% from 2015 through 2019, according to data from the Food Industry Association. Those were the highest margins the association has seen in reports dating back to 1984.

Andy Harig, a vice president at the association, said high demand for food at home early in the pandemic, when restaurants were closed or in-person dining was considered risky, gave food retailers leverage to boost profits. He said consumers also bought more higher-margin products like seafood during the crisis, while changes in shopping — including the rise in food delivery — let stores trim labor costs.

But he also said the net profit figure is expected to fall back to the long-run industry average of between 1% and 2%.

Still, the rising cost of necessities has been top of mind for U.S. officials, with consumer sentiment near a low point after a year when average gas prices reached $5 a gallon. Thanksgiving-related travel this year may at least be cheaper than it was, with airline and fuel prices having declined recently.

And there may be some respite on the food front as well.

Walmart Inc., for example, said earlier this month that it would leave prices for Thanksgiving staples unchanged from last year and keep them in effect through Christmas, including turkey for under $1 a pound.

Discounted turkey prices often lure consumers to grocery stores and supermarkets, and bargains intensify as the holiday approaches. The Farm Bureau noted that frozen turkey prices had fallen to 95 cents a pound as of this week.

Auburn’s Sawadgo said that shopping for alternatives can also bring down the cost, with one of his personal favorites, collard greens, selling right now at $1.14 a pound, down 3 cents from last year, according to U.S. Department of Agriculture data.

Sawadgo recently priced the goods for a Thanksgiving dinner for six at about $70.76, up 19% from $59.50 for the same basket last year.

“If you are not someone who shops the ads, this might be the year to do that,” he said.