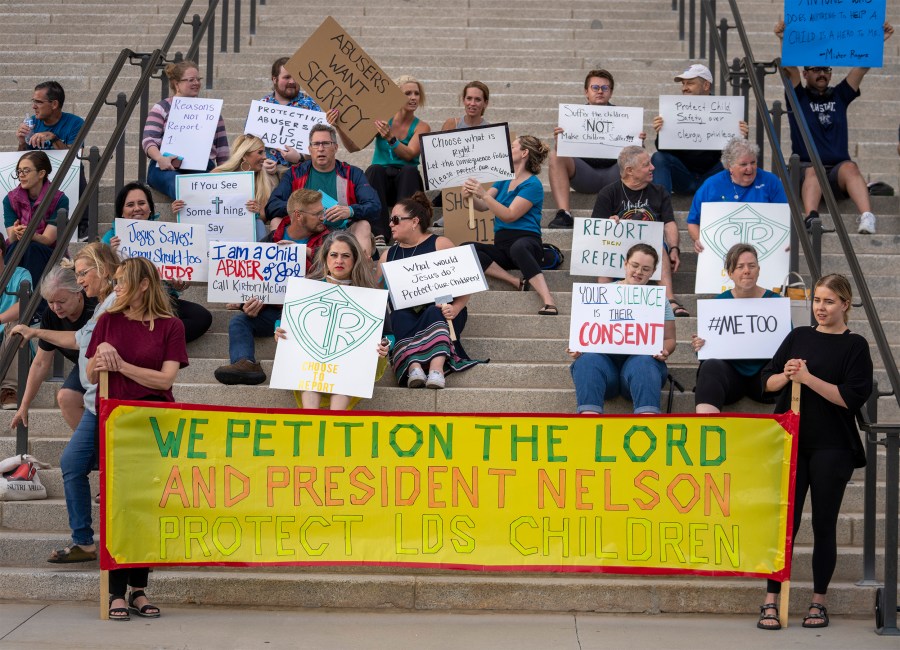 SALT LAKE CITY (AP) — Survivors and faith leaders rallied Friday at the Utah State Capitol to demand change to a state law that exempts religious leaders from requirements that they report child sexual abuse brought to their attention in spiritual confessions.

“If we as a people, as churches and as a state are failing to protect our children, then we are failing,” Lindsey Lundholm, the rally’s organizer, told an audience of more than 100 in Salt Lake City that included survivors of abuse applauding while tears streamed down their faces.

Lundholm spoke of her firsthand experience of abuse growing up in Idaho as a member of The Church of Jesus Christ of Latter-day Saints. As a young girl and member of the faith widely known as the Mormon church, she said she told a local bishop about her abuse and instead of reporting it to law enforcement, the bishop guided her abuser to seek forgiveness from God.

Lundholm’s story was one of many shared on the steps of the Capitol, which stands on a hill above the church headquarters and its Salt Lake Temple. Other women also shared their stories and read aloud written accounts collected for the demonstration, using them to demand lawmakers require clergy report abuse when it’s confessed to them.

The rally comes two weeks after an Associated Press investigation found the church’s abuse reporting system can be misused by church leaders to divert abuse accusations away from law enforcement and instead to church attorneys who may bury the problem, leaving victims in harm’s way.

The AP story, based on sealed records and court cases filed in Arizona and West Virginia, uncovered a host of concerns that victims have raised about the helpline. Those include how church officials have cited exemptions to mandatory reporting laws, so-called clergy-penitent privilege, as an excuse for not reporting abuse brought to their attention of children as young as 5 years old.

Since its publication, the church has criticized the story as flawed. In a statement this week, its representatives said the help line “has everything to do with protecting children and has nothing to do with cover-up,” but did not dispute any of the story’s facts.

Utah is among more than 20 states with similar laws that give reporting exceptions to clergy who receive information about child neglect or sexual abuse during spiritual confessions. The exemptions do not extend to therapists, doctors or any other adult known to offer confidential counsel.

Utah Gov. Spencer Cox and lawmakers from different faith backgrounds and both sides of the aisle have recently come out in support of changing the state law exempting clergy from mandatory reporting. But such a law could face an uphill battle in Utah, where the church commands sizeable cultural and political influence, counts an estimated two-thirds of residents as members and relies on volunteers to serve as clergy members.

Rep. Angela Romero, a Democrat whose efforts to end the exemption stalled in 2020, said Friday that she remained committed to changing the law.

“I’m tired of making excuses for perpetrators,” she said, noting that her push had recently won support from Latter-day Saint Republicans.

“Such a requirement, codified in state law, may have the additional benefit of allowing the helpline for bishops now operated by the LDS church to better perform its stated purpose — which is to provide expertise and resources to help the victims of abuse,” he said.

Texas Longhorns, Bijan Robinson prove too much for UTSA to handle in 41-20 loss