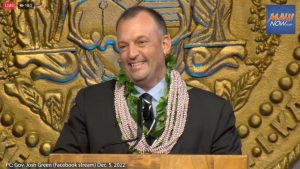 Josh Green, who spent more than 20 years as a physician in rural Hawai’i County, opened his inauguration speech as Hawaiʻiʻs 9th governor by touting his Big Island ties.

On Monday, from the dais at the Neal S. Blaisdell Center in Honolulu, Green credited the people of Nāʻālehu, Ocean View, Punaluʻu, South Kona and Volcano with teaching him “the true meaning of aloha,” before attributing the impetus of his political career to in-clinic experiences.

“I saw how local families, communities and churches reach out to people who need
help, and how we try to lift people up whenever we can,” he said. “I also saw how difficult things could be for local families. Many of my patients didn’t have jobs. Too many people I cared for were fighting addiction, or wrestling with untreated mental illness.

“In Ka’u, we didn’t have the resources we needed to fight these problems — so I ran for
state representative to try to make a difference.”

Green was elected to the state House of Representatives in 2004, before jumping to the State Senate in 2008. He remained a state senator until 2018, when he was elected to the office of lieutenant governor under then-Gov. David Ige.

In his inauguration speech, Green promised to waste no time in leading the charge against the state’s ongoing affordable housing crisis and other woes.

“As governor, I will unite us in common purpose, bring public officials together with
private developers and philanthropists, and build thousands of new homes for Hawai‘i
families,” he said.

The average sales price for a single-family home Hawai‘i surpassed $1 million in early 2021, according to the state Department of Business, Economic Development & Tourism’s most recent annual report.

Green, who was joined by new Lieutenant Gov. Sylvia Luke, also vowed to address homelessness, poverty and climate change during his next four years in office. He called for unity – “Hawai‘i is one ‘ohana” – throughout his remarks.

“When we come together, we can meet any challenge, and accomplish anything we set
our minds to,” the newly-minted Democratic governor said.

Green takes over for Gov. David Ige, who did not run for reelection because he was term-limited.

Green also promised to authorize the release of $50 million of grants-in-aid before the end this year, to demonstrate his new administration “will not wait to take action to help people.”

Recipient organizations will include the Hawai‘i Blood Bank, the Hawai‘i Foodbank, the Domestic Violence Action Center, the Aloha Medical Mission, the Hawaiian Humane Society, the Institute for Human Services and Special Olympics Hawai‘i.

Green’s medical background also has surely informed his stance against the state’s general excise tax on health care, which he targeted before closing Monday’s speech.

“We dealt with the worst global pandemic in a century, better than anyone else, but we
are still witnessing an epidemic of poverty and injustice in our own back yard,” he said. “We’ll eliminate regressive taxes like the tax on food and medicine, which hits poorest families the worst, to make Hawaiʻi affordable for those struggling to survive from paycheck to paycheck.”

The situation on Kaua‘i has prompted vocal warnings from the founder of Hale Lea Medicine & Urgent Care Clinic in Kīlauea, and a new university program funded by billionaire couple and North Shore residents Dr. Priscilla Chan and Mark Zuckerberg.

Green again set his sights high, as he closed out his first remarks as the State of Hawai‘i’s ninth governor.

“We can set an example for the whole world … if we truly come together and
commit to putting our values of ‘ohana and aloha into practice,” he said.

Video of the inauguration is available here.