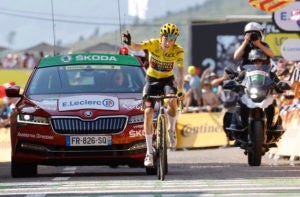 After 18 stages of intense struggle, Denmark’s Jonas Vingegaard put one hand on the 2022 Tour de France title on Thursday as defending champion and closest rival Tadej Pogacar wilted in the Pyrenees. Vingegaard’s solo win on the Hautacam mountain extended his lead to a daunting 3 minutes and 26 seconds while his sportsmanship, when […]