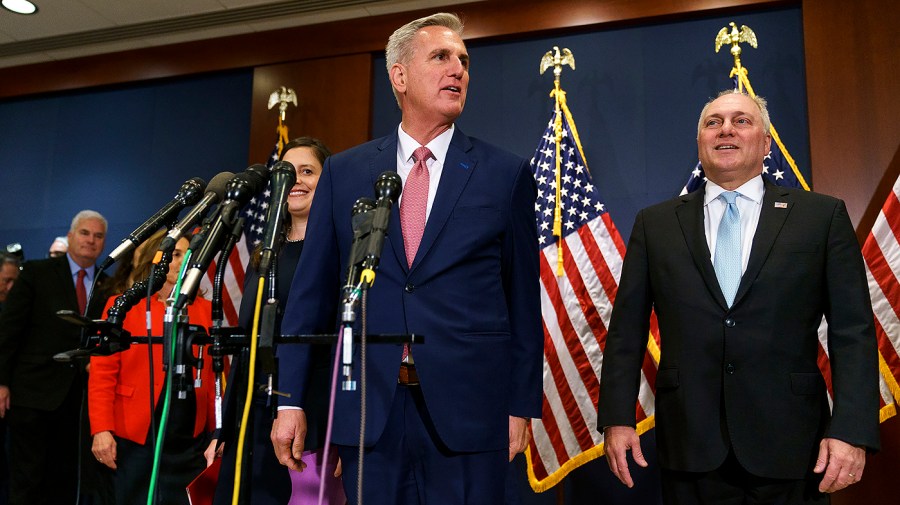 House Minority Leader Kevin McCarthy (R-Calif.) is toeing a delicate line on national security issues in the lame-duck session as he seeks to win enough votes on the House floor to win the Speakership in January.

McCarthy is torn between competing factions of the GOP as he weighs a series of moves targeting the Biden administration and other Washington Democrats in the next Congress — all while trying to convince conservative GOP lawmakers to back him for Speaker.

And McCarthy has indicated he will withhold GOP support for a lame-duck vote on a bipartisan defense policy bill as a way to fight “wokeism” in the military.

If the delay is successful, it would mark the first time in more than 60 years that has Congress failed to reauthorize Pentagon spending by the end of a calendar year; the delay would allow a GOP House to take it up next year.

“Never in the history [of Congress] have you had the majority tell the minority who can be on committee,” McCarthy said at the start of 2022. “This is a new level of what the Democrats have done.”

For Schiff, McCarthy has zeroed in on his role in the investigation into Trump’s ties to Russia, accusing him of lying to the public about the former president’s ties to Moscow and Hunter Biden’s work in Ukraine. He’s bashed Swalwell for his ties to a Chinese spy with whom he cut off contact after being warned of her true identity by the FBI.

Schiff said his targeting is nothing more than an effort by McCarthy to win support for his Speakership bid.

McCarthy was elected Speaker-designate in a closed-door GOP conference vote, but lost 31 votes. He will need to win over many of them to be elected Speaker on the House floor.

The Mayorkas fight reflects the awkward line that McCarthy is trying to walk.

He courted conservative votes last week by vowing an investigation of Mayorkas but did not fully embrace an impeachment vote, allowing himself wiggle room to change his mind next year.

“If Secretary Mayorkas does not resign, House Republicans will investigate. Every order, every action and every failure will determine whether we can begin impeachment inquiry,” McCarthy said at a press conference in El Paso, Texas.

In an appearance on ABC’s “This Week,” Rep. Michael McCaul (R-Texas) expressed doubt the GOP would be able to impeach Mayorkas swiftly.

“You’ve got to build a case. You need the facts, evidence before you indict. Has he been derelict in his responsibilities? I think so,” he said.

Other Republicans, however, want to go full steam ahead, suggesting anything short of Mayorkas’s removal would put the country’s security at risk.

“He needs to go,” Rep. Ronnie Jackson (R-Texas) told Fox News on Sunday. “We need to make an example of Mayorkas. And he will be just the start of what we do in this new Congress.”

Other Republicans have dismissed an impeachment vote as a stunt.

“It would basically be putting form over substance to go through a big performance on impeachment that’s never going anywhere,” former Homeland Security Secretary Michael Chertoff, a George W. Bush appointee, said over the weekend, “rather than actually working with the administration to solve the problem.”

McCarthy also faces divisions on delaying the defense bill, as some Republicans want to move forward and also pull back from threats to limit support for Ukraine.

McCarthy says he wants to pump the breaks on the National Defense Authorization Act (NDAA) and another round of funding to aid Ukraine in its battle against Russia, saying he wouldn’t back a “blank check.”

“I’ve watched what the Democrats have done on many of these things, especially the NDAA — the wokeism that they want to bring in there,” McCarthy told reporters shortly after the midterms. “I actually believe the NDAA should hold up until the 1st of this year — and let’s get it right.”

McCarthy is far from the only Republican with complaints about the NDAA. Sen. Marco Rubio (R-Fla.) put out a report slamming the “Woke Warfighters” of the Pentagon. But McCarthy is also facing pressure from the right.

Democrats and the Biden administration argue a delay will hurt the military.

On Ukraine, some Republicans have bristled at the idea of holding back any funding as the country continues to make advances against Russia.

“We’re going to make certain they get what they need,” House Intelligence Committee ranking member Mike Turner (R-Ohio) said in an appearance alongside McCaul.

“The fact is, we are going to provide more oversight, transparency and accountability. We’re not going to write a blank check,” McCaul added. “Does that diminish our will to help the Ukraine people fight? No. But we’re going to do it in a responsible way.”