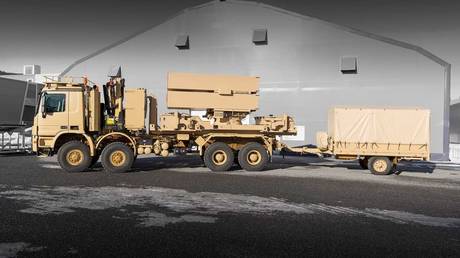 Russia continues to defend its interests, the Kremlin says

Russia continues to safeguard its interests, the Kremlin has said in response to reports about Washington’s plans to send new missile systems to Ukraine.

“We didn’t receive any notifications on the matter. As far as actions to defend [our] interests are concerned, [we are] making them on a regular basis,” Kremlin spokesman Dmitry Peskov told reporters on Monday.

Peskov’s statement came after several news agencies reported that the US was purchasing a medium-to-long range surface-to-air missile system for Ukraine.

The Associated Press said the system in question is the Norwegian-developed NASAMS – one of the weapons Ukrainian President Volodymyr Zelensky has requested in the past.

The US and other NATO countries have been increasingly supplying Kiev with heavy weapons to help it fight Russian troops. The recent deliveries include US-made M142 HIMARS multiple rocket launchers and M777 howitzers.

Peskov said this month that “flooding” Ukraine with foreign weapons will not change the course of the conflict and will only lead to more suffering and destruction in Ukraine.

Russia attacked the neighboring state in late February, following Ukraine’s failure to implement the terms of the Minsk agreements, first signed in 2014, and Moscow’s eventual recognition of the Donbass republics of Donetsk and Lugansk. The German- and French-brokered protocols were designed to give the breakaway regions special status within the Ukrainian state.

The Kremlin has since demanded that Ukraine officially declare itself a neutral country that will never join the US-led NATO military bloc. Kiev insists the Russian offensive was completely unprovoked and has denied claims it was planning to retake the two republics by force.