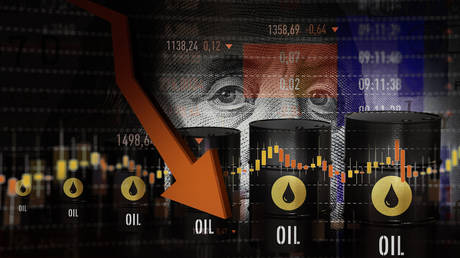 Oil prices continued to tumble on Friday and are on track to post a 10% loss on the week amid concerns of a global economic slowdown, which could slash demand.

Global benchmark Brent crude was trading slightly above $76 per barrel as of 9:50am GMT, while US West Texas Intermediate slid to below $72. Brent closed the previous session at $76.15 a barrel, setting a new low for 2022. Both Brent and WTI hit one-year lows this week, wiping out gains since hitting record highs of $147 a barrel in July.

Economists have pointed to growing demand concerns in the oil market, while fears of a global recession are being amplified by the tightening of monetary policy.

The EU-G7 embargo and price cap on Russian oil has so far had a limited effect on the oil markets, experts noted. According to Reuters, traders anticipated that the price cap and Moscow’s response would cut production by more than the economic slowdown did with consumption.

Fears about the impact kept prices elevated, and even pushed them up from late September through October, despite the increasingly poor outlook for the economy. However, from early November, it “became increasingly clear the cap would be introduced at a relatively high level with a relaxed approach to enforcement,” the outlet noted.

Analysts say that fears of a looming global recession are fueling a bearish mood among traders, and this is being reflected in prices. High oil and other energy prices themselves have contributed to the broader economic slowdown through their impact on inflation, interest rates and consumer spending.

“Oil has been dragged lower by broader recession fears that accompany global monetary policy tightening,” Vishnu Varathan, the head of Asia economics and strategy at Mizuho Bank, told Bloomberg. “And given the lags in monetary policy, a ‘wall of tightening’ may hit the global economy yet,” he said.