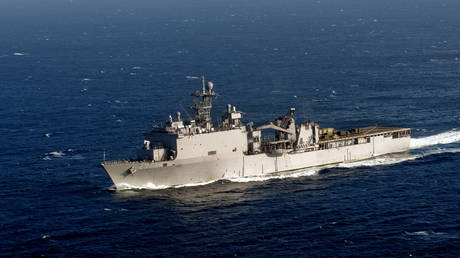 The Solomon Islands have temporarily barred US Navy vessels from entering its ports months after the country signed a security and cooperation agreement with China, the US embassy in Canberra, Australia has said.

“On August 29, the United States received formal notification from the government of Solomon Islands regarding a moratorium on all naval visits, pending updates in protocol procedures,” the embassy stated.

Meanwhile, Manasseh Sogavare, prime minister of the Pacific nation, asked the country’s partners to give the government some time to put in place a new procedure to approve port visits. According to the minister’s statement, which was emailed to Reuters, when adopted, the new rules “will universally apply to all visiting naval vessels.”

His statement went on to say that the nation had “unfortunate experiences of foreign naval vessels entering the country’s waters during the course of the year without diplomatic clearance granted,” without providing any specifics.

The suspension comes after an incident on August 23, when a US Coast Guard vessel requested permission to stop and refuel but received no response from the Solomon Islands authorities. At the time, US National Security Council spokesman John Kirby said that Washington was “disappointed in this decision.”

In response, Sogavare claimed that the US ship had received permission to dock, but when it was granted, the American vessel had already left the nation’s waters, apparently heading for Papua New Guinea instead.

In April, the Solomon Islands signed a security pact with China to address security threats and ensure a safe environment for investment. The move, however, did not sit well with a number of Western countries, with the US saying that Washington was concerned about “the lack of transparency and unspecified nature” of the agreement. Australia, meanwhile, voiced concern that the treaty had the “potential to undermine stability in our region.”

Outages could last days after shootings at substations