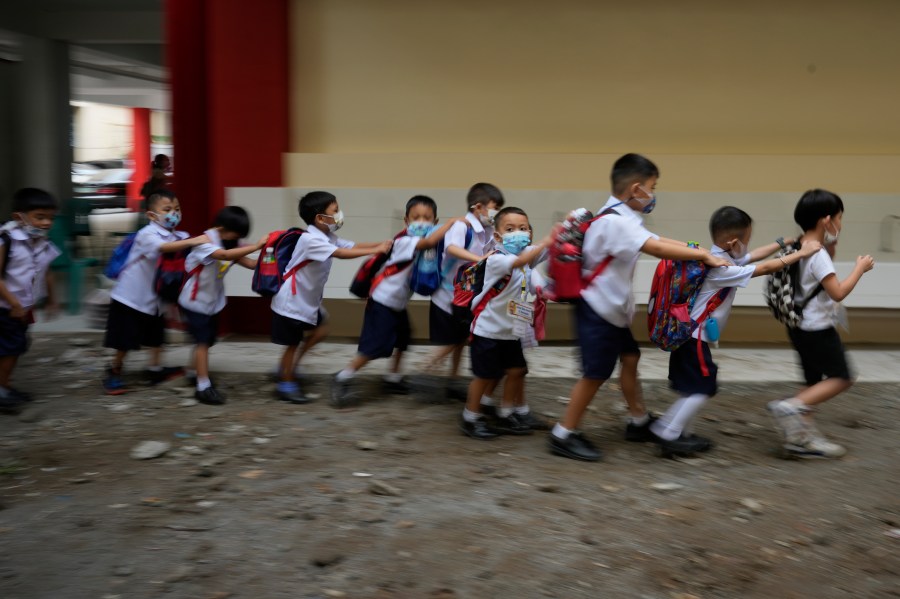 MANILA, Philippines (AP) — Millions of students wearing face masks streamed back to primary and secondary schools across the Philippines Monday in their first in-person classes after two years of coronavirus lockdowns that are feared to have worsened one of the world’s most alarming illiteracy rates among children.

Officials grappled with daunting problems, including classroom shortages, lingering COVID-19 fears, an approaching storm and quake-damaged school buildings in the country’s north, to welcome back many of more than 27 million students who enrolled for the school year.

Only more than 24,000 of the nation’s public schools, or about 46%, would be able to open in-person classes five times a week starting Monday, while the rest would still resort to a mix of in-person and online classes until Nov. 2, when all public and private schools are required to bring all students back to classrooms, education officials said.

About 1,000 schools will be unable to shift to face-to-face classes entirely during the transition period ending on Nov. 2 for various reasons, including damages to school building wrought by a powerful earthquake last month in the north, officials said.

The Department of Education said some schools would have to split classes up to three shifts a day due to classroom shortages, a longstanding problem, and to avoid overcrowding that could turn schools into new epicenters of coronavirus outbreaks.

“We always say that our goal is maximum of two shifts only but there will be areas that would have to resort to three shifts because they’re really overcrowded,” Education Department spokesperson Michael Poa said Friday at a news conference. Despite many concerns, education officials gave assurances that it’s “all-systems go” for Monday’s resumption of classes, he said.

Sen. Joel Villanueva, however, said such assurances have to be matched by real improvements on the ground.

“The era of missing classrooms, sharing tables and chairs and holding classes under the shade of trees must no longer happen,” said Villanueva, who filed two bills calling for additional grocery, transportation and medical allowances for public school teachers.

Among the worst-hit by the pandemic in Southeast Asia, the Philippines under then-President Rodrigo Duterte enforced one of the world’s longest coronavirus lockdowns and school closures. Duterte, whose six-year term ended June 30, had turned down calls for reopening in-person classes due to fears it might ignite new outbreaks.

The prolonged school closures sparked fears that literacy rates among Filipino children — which were already at alarming levels before the pandemic — could worsen.

A World Bank study last year showed that about nine of 10 children in the Philippines were suffering from “ learning poverty,” or the inability of children by age 10 to read and understand a simple story.

“Prolonged school closures, poor health risk mitigation, and household-income shocks had the biggest impact on learning poverty, resulting in many children in the Philippines failing to read and understand a simple text by age 10,” UNICEF Philippines said in a statement.

Education officials also scrambled to help more than 28,000 students look for new schools after at least 425 private schools closed permanently since the pandemic’s arrival in 2020, mainly due to financial losses. About 10,000 of the students have been enrolled in public schools, according to Poa.

Poverty has also been a key hindrance to education. Crowds mobbed the Department of Social Welfare and Development offices Saturday to claim cash aid for indigent students, injuring at least 26 people who were pinned in entrance gates and prompting its top official to go on TV to appeal for order.

President Biden: ‘The pandemic is over’

Being single could increase your risk of stomach cancer, study claims