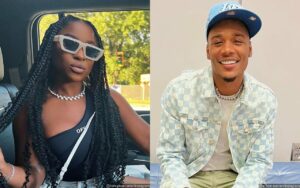 Reginae Carter is clapping back at all the “aunties” hating on the promise ring her boyfriend Armon Warren gifted her for Christmas.

On Christmas, Carter shared a video showing the moment her boyfriend gifted her with a brand new promise ring in honor of their six-month anniversary.

“This my promise ring to you, baby,” Warren says in the viral video, captured by The Shade Room.

“This is my loyalty, this is love. This is everything. This is me, investing my time, and everything into you. I only want to be with you.”

But soon after sharing the heartwarming moment, Carter caught wind of the shady responses some trolls had about the ring.

“[I] just feel like promise rings childish at this big grown age,” one viewer wrote.

Carter is not one to bite her tongue and soon took to Twitter to call out the “aunties” and anyone else hating on her love with Warren.

“Yall old a***s mad at my promise ring but been in 10 year relationships with a bunch of broken promises,” Carter quipped. “Get you somebody to take care of your time not waste it aunties.”

After the initial shade, many others defended Carter and the promise ring Warren gifted her.

“Not sure what the problem is they’ve been dating for 6 months was he supposed to give her a baby like ni***s do y’all ?” one user wrote.

“It’s only 6mo at least it’s a promise ring and not a baby tf,” added someone else.

Warren is the first person Carter has publicly dated after her breakup with rapper YFN Lucci who remains incarcerated facing a slew of criminal charges.

Meanwhile, Carter is ignoring the haters and celebrating her six-month anniversary with her YouTube personality boyfriend. She shared a celebratory post recapping her time with Warren.

“Happy Anniversary baby ! This Christmas is more special to me than ever because you came into my life and brought me so much joy

“Imma love you out loud every chance that I get baby

Is there a link between ‘Aid to Ukraine,’ the US Democratic Party and the suspicious collapse of the FTX Crypto exchange?