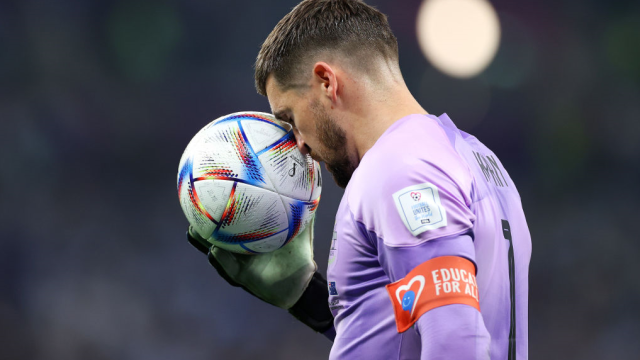 Socceroos captain Mat Ryan wishes he sank the boot in, just as his arch club foe did to him.

Ryan is determined his blunder in Argentina’s 2-1 triumph over Australia in their knockout encounter at the World Cup in Qatar will not define him.

The goalkeeper lost control of a ground ball and Argentina’s Julian Alvarez pounced, scoring into a vacant net to put his side 2-0 up.

“But we all go through hardships in life and you have just got to keep bouncing back and rolling up your sleeves and learning from them.

“That is life’s way of throwing you your biggest lessons. And that is what I am going to try and do and come back bigger and better for it.”

Ryan has been involved in a cranky relationship at his Danish club FC Copenhagen with fellow goalkeeper Kamil Grabara.

Ryan was signed by Copenhagen when the Polish shot-stopper was injured but has since lost his spot to Grabara, who wasted no time in taking a swipe at the Australian after his World Cup error.

“Must have been politics, for sure,” Grabara posted on Twitter, with a smirking emoji, suggesting Ryan lost his No.1 ‘keeping status at Copenhagen not because of club politics, but skill.

Grabara, who was an unused member of Poland’s squad at the World Cup in Qatar, has previously said he is not friends with Ryan and does not consider the Australian a rival as No.1 club custodian.

Told of Grabara’s post, Ryan replied: “I am not surprised at it, to be honest. But his opinion doesn’t really concern me.”

Ryan said his costly mistake against Argentina came while trying to follow instructions to play the ball out from defence.

“I took a touch and two of them were on me straight away,” he said.

“I tried to adjust as quick as I could and copped a little bump, maybe I could have tried to milk a foul there or something like that in hindsight.

“Or put my foot through it.

“The modern way of playing out from the back, you obviously have still got to find the right balance of doing that and knowing when to get yourself out of danger and just put your foot through it.”

Praise from the mighty Messi

Speaking after the contest, Argentina great Lionel Messi said he wasn’t surprised by the Socceroos’ never-say-die fight in the final minutes.

“It was a very difficult match, we knew it was going to be this way,” he said.

“We knew it was going to be a very physical match and they were very strong.

“We had the game under control and could have scored another one – we were almost punished for it in the last minute.

“There were a few scary moments … it was a tough game, a tough day.

“We’re through, that’s the important thing.”

Agentina next meet the Netherlands in next Friday’s quarter-final (0600 Saturday AEDT) as Messi seeks to capture the World Cup at his fifth attempt.