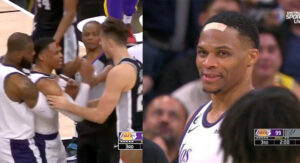 Russell Westbrook was ready to throw hands on Saturday night. The 34-year-old Lakers guard had to be held back after a hard foul left him gushing blood from his forehead.

Late in the third quarter of Los Angeles’ game against San Antonio, Westbrook drove on the baseline and went up for a poster dunk. He was unsuccessful and got stuffed by Spurs forward Zach Collins.

However, after the miss, Westbrook was able to grab his own rebound and immediately went back up with another shot attempt. As he did, Collins came down hard, hit Westbrook in the head, and knocked him down onto the court.

That is when things got chippy— and bloody.

Westbrook immediate jumped to his feet and charged at Collins with anger in his eyes. Before he could get to his opponent, LeBron James reached out, grabbed his teammate and held him back.

Once things calmed down, Westbrook went over to the bench with blood streaming down his face out of a nasty gash that was caused by Collins’ hard contact.

It looked like it was a pretty significant cut on Russell Westbrook’s bloody forehead.

As Westbrook got cleaned up on the sideline, the officiating crew went to review.

After watching the play back and deliberating for a moment, they hit Collins with a ‘Flagrant 2’ foul and sent him to the locker room for an early shower. Westbrook also received a technical foul and later followed Collins to the locker room after shooting free throws.

Collins, because he was ejected, did not return. Westbrook later returned to the bench and eventually checked back into the game. Although it was not entirely clear, it did not look like he needed stitches and a band-aid seemed to do the trick.

The Lakers went on to win and Westbrook finished with 10 points, eight rebounds and six assists in 26 minutes.

The post Russell Westbrook Tries To Fight Spurs After Hard Foul Leaves Him Gushing Blood From Cut On His Forehead appeared first on OutKick.

Noah Vonleh ‘excited’ about making Celtics roster, says ‘everybody is still locked in’