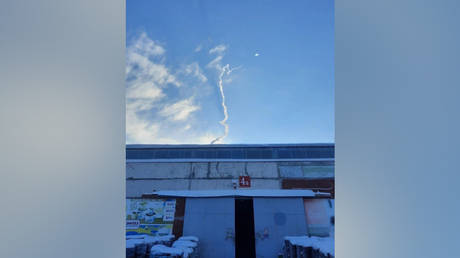 Russian air defense has destroyed an unidentified object over Saratov Region, its governor has reported. The district where it happened hosts an air base, which previously came under Ukrainian drone attacks, according to the Russian military.

The engagement over the Engels district was reported on Thursday by Governor Roman Busargin on social media. He urged residents to keep calm. Claims that an evacuation from the city of Engels, the region’s administrative capital, may be needed are false, he said.

Earlier in the day, there were reports of explosions near Engels. Local emergency services were deployed to investigate the situation, the governor’s office told the media. Images posted on social media purportedly show the moment of the interception.

Engels is located 730km southeast of Moscow and is notable for the air base just outside of the city, which hosts part of Russia’s strategic bomber fleet. This month, the military facility was attacked twice by Ukrainian drones, the Russian Defense Ministry reported.

The first incident occurred on December 5 and involved “Soviet-made” jet drones targeting the air base and the Dyagilevo airfield in Ryazan Region, the Russian military reported at the time. The aircraft were intercepted, but debris killed three military service members and injured four others, the statement said, without breaking down the casualties between the two locations.

The second attack took place on Monday morning and also resulted in fatalities. Three technical personnel were killed by debris from an intercepted drone, the Defense Ministry reported, without offering details about the model of the weapon system.

Saratov Region is located around 900km from the Kiev-controlled areas of eastern Ukraine.

The air defense action over Saratov Region on Thursday came amid reports in Ukraine about a Russian missile barrage targeting its energy infrastructure.

Ahead of Labor Day, where US airlines rank on reliability this year