Early Saturday afternoon, after the Bills traveling party arrived at the team hotel in Detroit, head coach Sean McDermott gathered his players together and gave them a little pep talk.

“When you go through and share an experience like this, it has a tendency to bring a team closer together,” he said.

That’s true. We saw how a team could come together for a beleaguered community when the Sabres played downtown after the October Surprise in 2006, and when the Bills had a home game moved to Detroit after another snowstorm in 2014.

This weather event was as massive as it was sudden. On Saturday, people in Orchard Park were coming out of their homes to help the Bills shovel their driveways so they could get to the facility on time to depart for the plane.

“I got five or six text messages to my wife and myself,” McDermott said. “Neighbors and friends saying, ‘Hey, whatever you need, we’ll be there to help you. That’s pretty special. I’m biased, but they call it the City of Good Neighbors for a reason.”

So, the players were eager to beat Cleveland on Sunday afternoon, for their own sakes but also for the community that adores them and the fans who packed Ford Field. The bond in a crisis is even stronger when a team has that kind of support.

But do you know what also brings a team together? Practice. The days leading up to an NFL game are one prolonged study hall. The Bills had a limited practice on Wednesday because so many players were either sick or nursing injuries.

On Friday, they didn’t practice at all because of a snowfall that was historic even by the standards of a town where snow is its national caricature. By Saturday, there had been 77 inches in Orchard Park, or precisely the height of one Josh Allen.

The lack of practice showed for much of the first half against the Browns. It seemed as if the Bills used the first 20 minutes as a glorified workout, a casual run-through. Midway through the second quarter, they were trailing, 10-3, and being outgunned by the Browns, 181 yards to 12. 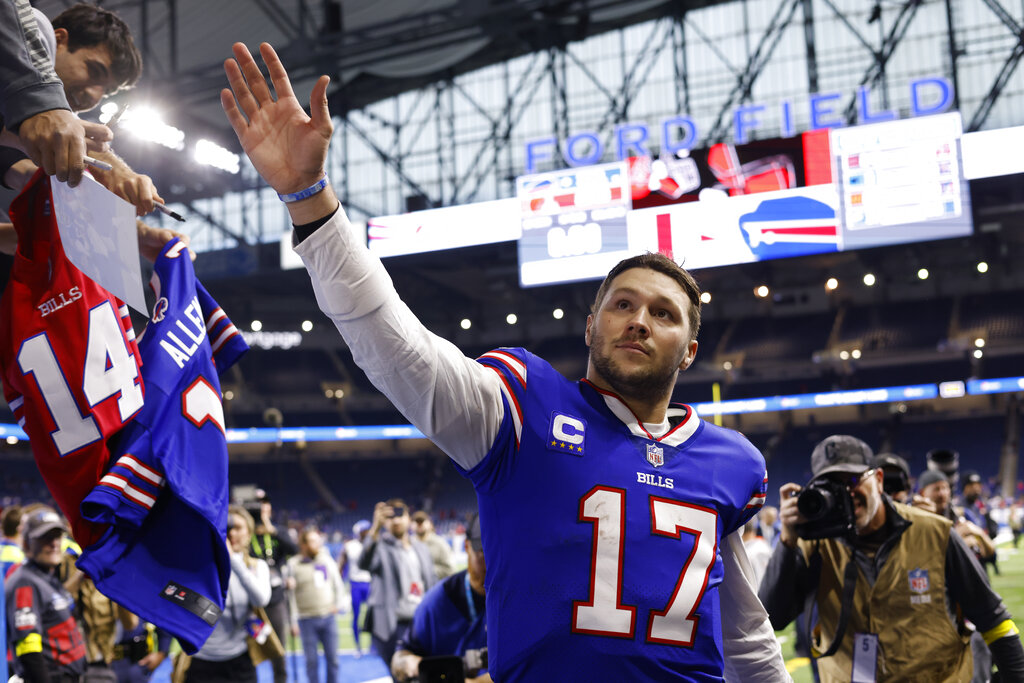 “We easily could have folded and allowed it to be an excuse for us,” quarterback Josh Allen said. “But I trust the guys in this locker room who are true professionals and do things the right way. We’re just trying to win a football game.”

They did just that. For a while, it looked like a continuation of the Vikings loss a week earlier. But the Bills rose to the challenge, like people stopping to help stranded motorists by the side of the road. Once they found their bearings, they dominated the Browns, 31-23, to snap their two-game losing streak.

At times, this team seems determined to make things difficult. For the second year in a row, they fell into a mid-season funk, with Allen and the offense faltering late in games and the defense struggling to stop the run and giving up big plays.

Yet again, McDermott’s close-knit squad showed its resiliency, an ability to rise to a crisis and restore order in the middle of a season. Look, it’s the NFL. No team is perfect, immune to stumbling. The Bills still have their issues, not least of which is an inability to keep everyone healthy on their defense.

But over the last 35 or so minutes of Sunday’s game at Ford Field, you saw why the wise guys in Las Vegas still considered the Bills the Super Bowl favorite, despite two straight losses and three games in a row without scoring a second-half touchdown.

It started with the defense, which had trouble with Jacoby Brissett, but shut down running back Nick Chubb and took over the game in the second half. The Bills had eight tackles for loss, only one a sack, as the defensive front played a dominant game.

Linebacker Matt Milano had 11 tackles, three for loss. He recovered a fumble that was the game’s turning point, alertly falling on Brissett’s fumbled snap when the Browns were leading, 10-3, and in Buffalo territory with 8:21 left in the second quarter.

One thing I learned in the Super Bowl days, watching the likes of Bruce Smith, Darryl Talley, Steve Tasker, Jim Kelly and Thurman Thomas, was that a half dozen or so plays by elite playmakers can separate two teams in a lot of NFL games.

Milano is that sort of playmaker. So is tackle Ed Oliver, who also had three tackles for loss, and safety Jordan Poyer, who returned from an injury and made his presence felt all day. The Bills are now 6-0 when Poyer plays. It’s no wonder he thinks he deserves a contract extension. 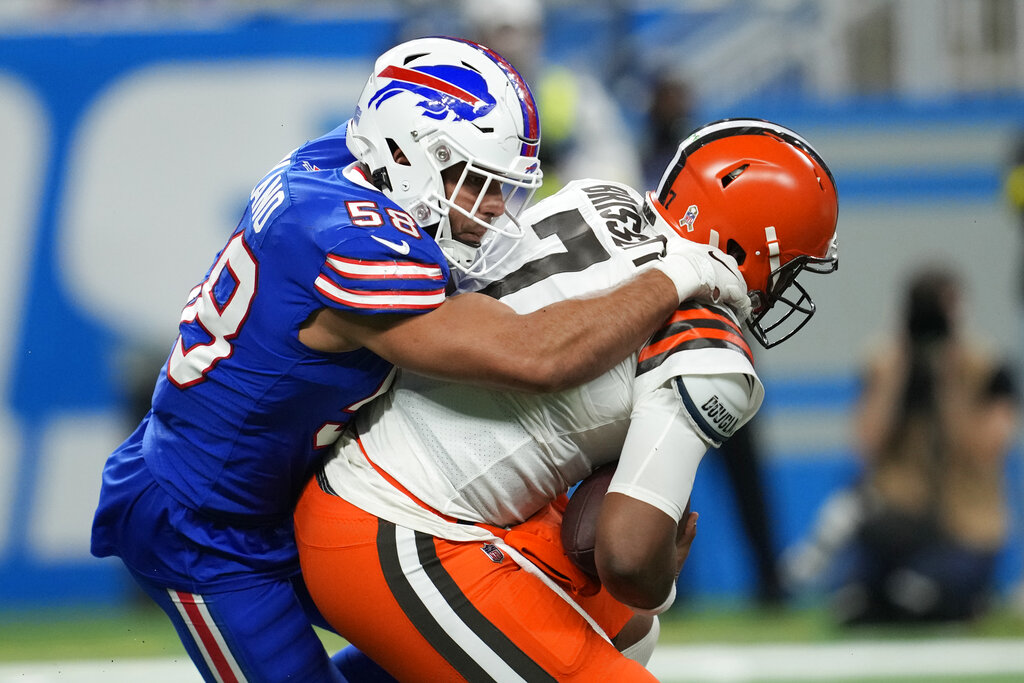 Stefon Diggs is another premier performer who can change a game in an instant. Diggs, who is on pace to break his own team records for catches and receiving yards in a season, wasn’t targeted for nearly a full half. But with 14 seconds left before halftime, he broke open in the end zone for a 5-yard TD pass from Allen that gave the Bills the lead for good, 13-10.

You suspected it was basically over for the Browns at that point. The Bills haf been dominated for more than 20 minutes, gone without a first down until well into the second quarter, and still led at halftime. Practice over, Cleveland. It was winning time.

“I felt we hurt ourselves a lot today,” said Allen, who was 18 of 27 passing for 197 yards — and no turnovers. “A lot to clean up. The feeling we have right now is we don’t feel we played very well. But it shows you playing smart football, we put up 31 points and didn’t play up to our standard.”

No team can score 31 points and have it seem inadequate like this Bills team. They’ve set an impossibly high standard and they know it. They scored on seven straight possessions Sunday, but five were Tyler Bass field goals. They could easily have scored 40 if they’d started faster and finished more drives.

Allen played an efficient, mistake-free game, settling for a lot of easy underneath completions after forcing a lot of throws the previous three games. It wasn’t a dazzling Allen performance, one for the highlight reels, but a winning one, a day when he happily deferred to his dynamic running game.

What made this win so encouraging was that Allen didn’t need to be great, that the Bills won with an array of playmaking by the surrounding talent on both sides of the football — and special teams. It’s a winning recipe that any championship team needs at some point in a title run.

Sure, there are times in a crisis when a team needs its franchise quarterback to take over a game and win it by sheer force of his athletic talent. But Allen presses when he feels the need to carry the Bills on his shoulders. There’s no need to bear that burden when Milano, Poyer and Von Miller are making plays, and when the offensive line is opening holes for the running backs.

The Bills addressed several of the key issues that had been swirling of late. They got strong running games from Devin Singletary and rookie James Cook, who each rushed for a career-best 86 yards. The Bills had 171 yards rushing — and Allen was a minor part for once, rushing for just 7 yards on three carries.

They got solid production from their “other” receivers. Gabe Davis had five grabs for 68 yards (and another drop). Tight end Dawson Knox tied a career high with seven catches, good for 70 yards. That’s what you expect after a big contract extension.

The defense allowed Jacoby Brissett to make some throws. But the main goal was stopping running back Nick Chubb, who was only the fourth back since 1950 to rush for 900 yards, 10 rushing touchdowns and 5.5 yards a carry over the first nine games.

Chubb had 19 yards on 14 carries, his first time under 50 yards this season and worst game in a year. It’s puzzling how the Bills can struggle against average backs and be so good against the best ones. Derrick Henry had 25 yards on 13 carries against the Bills. He’s averaged 109 rushing yards in his other games.

The run defense rose up in the biggest moments. Down 16-10, the Browns had third-and-1 from the Bills’ 27-yard line midway through the third quarter. Jacoby Brissett tried a quarterback sneak on consecutive plays and got stuffed, the second time by Shaq Lawson after a quick snap. 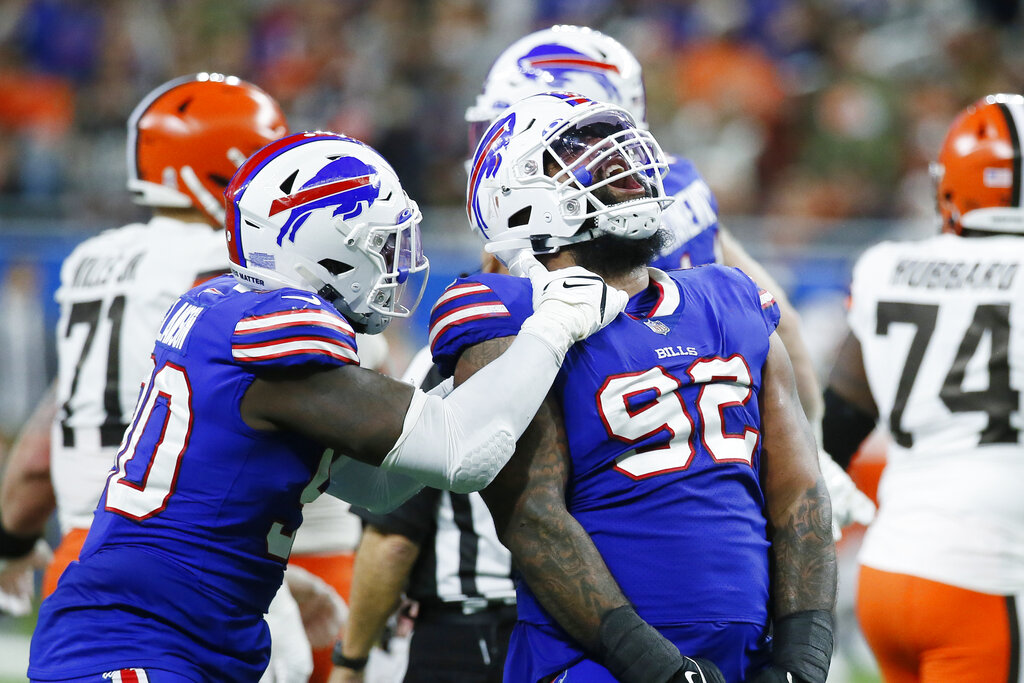 Buffalo’s players said they had expected Brissett to sneak in that situation. They had studied the Browns’ tendencies and knew that Brissett, who is 6-4, 235 pounds, ran the sneak on a high percentage of Cleveland’s plays in those situations.

“That’s preparation at its finest,” McDermott said. “I watched it over and over all week. No one was stopping (Brissett). He’s a big guy. Two plays in a row, our guys stood up and did a great job.”

The Bills are now 7-3 and tied with the Dolphins (who beat them) atop the AFC East. The Patriots and Jets are both a game back in the division at 6-4 after New England stunned the Jets in Foxboro on an 84-yard, last-second punt return by Marcus Jones on Sunday.

It’s a crazy league. On Thanksgiving, the Bills head back to Detroit to face the Lions, who upset the Giants, 31-18, on the road for their third straight win after a five-game losing streak. The Lions have allowed the most points in the league thus far.

Considering the weather back home, and the fact that have to play in Detroit against in four days, you wonder if the Bills might have been better off simply staying in Michigan.

“We talked about it,” McDermott said. “I want to get the guys some quality rest. Get in their own beds tonight. Fortunately, we can get out of here at a decent time and get them home and settled. I think there’s value in guys staying at home and sleeping in their own beds a couple of nights.”

Before they know it, they’ll have to turn around and head back to Detroit. This time, presumably, they won’t need a plow.

Jerry Sullivan is an award-winning journalist who joined the News 4 team in 2020 after three decades as a sports columnist at The Buffalo News. See more of his work here.