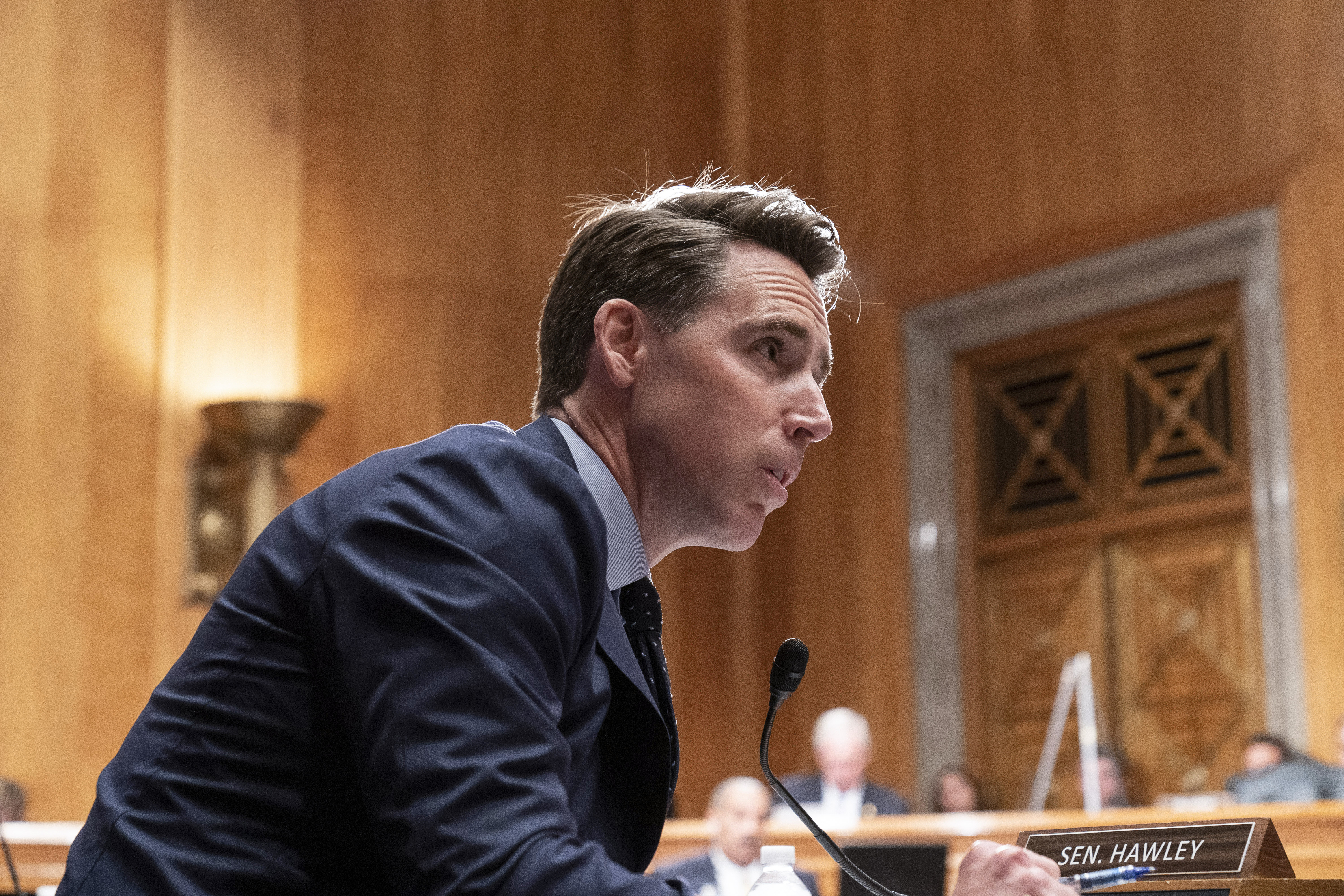 The most revealing Trump comment this month wasn’t about his legal jeopardy, his taxes or even the get-yours-now NFTs he began hawking ahead of the holidays for a cool $99 each.

In fact, the comment wasn’t even made by Donald Trump himself.

Like much from his social media oeuvre, Trump the younger was thirsting for clicks and attention (mission accomplished!). Yet his attack, wrapped with a dog whistle-shaped bow for his fellow conservatives, represented more of a substantive critique on a signal foreign policy issue than his dad has ventured in recent weeks.

More significantly, the invective, from a dedicated troll who’s obsessive about properly channeling the right’s id, was a reminder of the churning debate within the Republican Party — one the party’s putative presidential frontrunner is effectively sitting out but that’s only intensifying.

After six years of defeat and coming on two decades since one of their standard-bearers claimed the popular vote, the GOP is in the midst of an identity crisis.

It must grapple with whether it’s going to retain the Reagan-shaped form most of its elites prefer, a light touch on the market and firm hand abroad, or shift to better reflect an increasingly working-class coalition with no doctrinal allegiance to the free markets and free people Gospel of Paul (Gigot). Or, the more likely outcome: try to forge a hybrid between the two approaches while emphasizing issues of tribal consensus — confronting the left at home and the Chinese abroad — and hope the Democrats put forward a weak nominee.

“A lot of people, I think, tried to put off this policy debate for years now by saying, ‘Well this is all just a question about Trump,’ and it’s like, ‘Oh no it’s not, no it’s not,’” Senator Josh Hawley (R-Mo.) told me. “He got elected president because he appealed to our new coalition and tapped into it but it’s well beyond any one guy, not to take anything from him.”

Hawley is perhaps the party’s leading exponent of realigning toward what he calls cultural conservatism and economic and foreign policy nationalism. Few Republican lawmakers are more eager than Hawley to transition away from the libertarian-and-interventionist approach favored by so many Republican donors and their allies in the Senate and on the Gigot-led Wall Street Journal editorial page.

However, Hawley has also been an unwavering, to a fault, Trump ally, is up for re-election in ever-reddening Missouri in 2024 and has no appetite to trigger the former president.

So he won’t quite say this: The quicker Trump fades as a political force the sooner the party’s reckoning may come.

As long as Trump dominates the GOP, the conversation will center around his persona — and all attendant scandals — rather than any policy deliberations.

This is more than a little ironic, of course. The former president’s triumph in the 2016 Republican primaries, his nationalist rhetoric ever since and the string of electoral losses he’s overseen culminating last month have led to this moment of crisis and fostered the permission structure for a debate about what it means to be a Republican.

Yet, as the GOP defeats have mounted and Trump’s interests have turned to legal survival and money-making, it’s increasingly clear that he was more symptom and accelerant of the change taking place in his adopted party than the leader of a newly-imagined, majority coalition. (There’s also the fact that Trump’s actual interests run more to golf and watching television than movement-building.)

“What voters want persistently they’re going to get and our voters have been trying to send a message as it relates to our economic and foreign policy and I think you’re going to see that reflected increasingly over time,” said Hawley, arguing that the working-class voters who today elect Republicans like him are “in the driver’s seat.”

Now the question is where they, or the traditionalists attempting to keep a hand on the wheel, will steer the party.

In preparation for the coming debate, an influential coterie of defense hawks, led by a group called the Vandenberg Coalition, commissioned an extensive survey earlier this month testing voter opinion on foreign policy issues.

I obtained a series of slides from the not-yet-released survey, conducted by the Republican polling firm Public Opinion Strategies.

“Republicans remain much more hawkish than Democrats on some of the big national security issues,” said Carrie Filipetti, who runs the non-partisan Vandenberg Coalition. Filipetti noted that the group’s research found Trump voters far more supportive than Biden backers of increased defense spending to confront China, uneasiness with the Obama administration’s Iran nuclear deal and a willingness to use force to prevent a nuclear Iran.

When it comes to the most serious, ongoing foreign policy issue confronting the West, though, she delicately conceded that GOP voters have less appetite for sending additional money and weaponry to Ukraine.

“Our polling suggests Ukraine hawks in both parties are going to have to emphasize oversight and accountability to bring a Republican House along in the new Congress,” Filipetti said.

Part of the right’s split-opinion on foreign policy issues can be chalked up to the predictable partisanship of a polarized age — 82 percent of Trump voters in the survey disapproved of President Biden’s handling of Ukraine. “Kamala and Pelosi hold a Ukrainian flag up in the well of the House and no wonder,” fumed one Republican hawk in explaining to me about how Democrats are not helping his cause.

There’s more at work than mere tribalism, though.

While there’s still a latent disdain toward Russia among many older Republicans, that enmity is not shared across the party’s rank-and-file.

For one, Rupert Murdoch’s influential media empire is divided. His print properties in the U.S. are largely supportive of Ukraine while Fox News, with its broader reach, deploys a pair of primetime anchors in Tucker Carlson and Laura Ingraham who are deeply uneasy about American efforts to bolster its defenses.

Other influential figures with the grassroots right, including Charlie Kirk and his youth-oriented Turning Point USA, are equally disdainful of sending more money and materiel to Kyiv.

“We shouldn’t underestimate the appeal of the Trumpy side here among younger conservative types,” said William Kristol, the neoconservative writer and former Republican, pointing to their ascent over six years. “What’s so distressing on Ukraine is that Trump is not driving the opposition, it’s the grassroots.”

To catch a glimpse at where the GOP’s new guard is on the issue, examine the response to Senate GOP leader Mitch McConnell when he posted a picture of himself standing with Zelenskyy in the Capitol and proclaimed that supporting Ukraine is both “morally right” and “a direct investment in cold, hard, American interests.”

“McConnell keeps spiking the football,” Ingraham responded. “I think he enjoyed the ’22 elections more than Biden.”

This is all to say that when the younger Trump belittles Zelenskyy it’s because there’s a receptive audience for such ridicule among the very online right.

What gives the new guard hope is that some in Congress are clearly getting the message.

Trumpeting the combined opposition among Senate and House Republicans to the just-passed omnibus spending bill, Representative Chip Roy (R-Tex.) said it was a “pretty damn big deal” that 229 of 263 Republicans between the two chambers would vote against a measure full of both earmarks and the sort of defense spending hikes that once would have been impossible for Republicans to resist.

“We’re getting a little bit of religion,” said Roy.

Hawley is more cautious in his optimism, in part because Senate Republicans are more reflective of a Bush-era party, as was made clear by the lack of support in their ranks for the rail workers earlier this month.

“Why would we ever be on the side of the suits rather than on the sides of these folks who are our people?” Hawley wondered about his caucus’ unwillingness to sweeten the contract of the rail workers unions who nearly went on strike.

Still, even the glacial Senate is changing, in part because of retirements and succession. Seven of the 11 Senate Republicans who opposed a supplemental Ukraine aid bill last spring were elected in the two previous election cycles. (Look no further than the votes of Tennesseans Marsha Blackburn and Bill Hagerty, who replaced, respectively, Bob Corker and Lamar Alexander, both committed internationalists.)

Hawley received another reinforcement this election from Ohio, where J.D. Vance was elected to succeed Sen. Rob Portman, a consummate establishmentarian.

Hawley said he had already started talking to Vance, whom he called “a fellow traveler,” about how they could push the party and said confidently there would be more than 11 no votes the next time a Ukrainian aid bill comes before the Senate.

The question at hand, though, is far bigger than the war in Europe. There’s what Republicans should stand for on trade, immigration and the role of government broadly in the economy.

National security, however, had long been the adhesive that held together an at-times unwieldy conservative coalition. The threat of communism unified Republicans through the Cold War and after 9/11 Islamic terrorism sustained that unity across factional lines. Then came Iraq.

The GOP’s Ukraine divide is so resonant because it’s here and now and because it neatly cleaves much of the party’s old and new guard. But it also cuts deeply because it represents a stand-in for the internal party debate that never took place over the Iraq war, the long shadow of which still stretches over the GOP nearly 20 years after American invasion.

“There are many folks in elected office who don’t really want to reckon with foreign policy failures and in some cases outright lies to the American people — that Iraq had weapons of mass destruction, that turns out that was a lie,” Hawley told me, adding that “we’re going to have to” come to terms with this history.

That is, to put it mildly, of little interest to most Republican officials, who’d like to get on with the business of rebuilding the party, defeating Democrats and reclaiming the presidency.

And many of these Republicans think there’s an obvious way to do that.

“The two wings [of the GOP] are close enough on China that this can be emphasized,” said Senator Bill Cassidy (R-La.), adding that the border and a potential recession on Biden’s watch will also unify Republicans. That trio of issues, Cassidy said, “can paper over other differences.”

More quietly, for now, other traditionalist Republicans have the same solution to their internal divide that they have for everything else the ails the party: Ron DeSantis.

While he may come off as a Trumpist in style, plugged-in hawks and doves alike in the party are convinced he tends to be more of an interventionist. The hawks take reassurance from those surrounding DeSantis and the doves, well, they’ve simply read his first book.

“Dreams From Our Founding Fathers,” is a riposte to Barack Obama, and not because he was too willing to project American force abroad.

Trump Tried to Steal an Election. Will the Media Still Care in 2024?