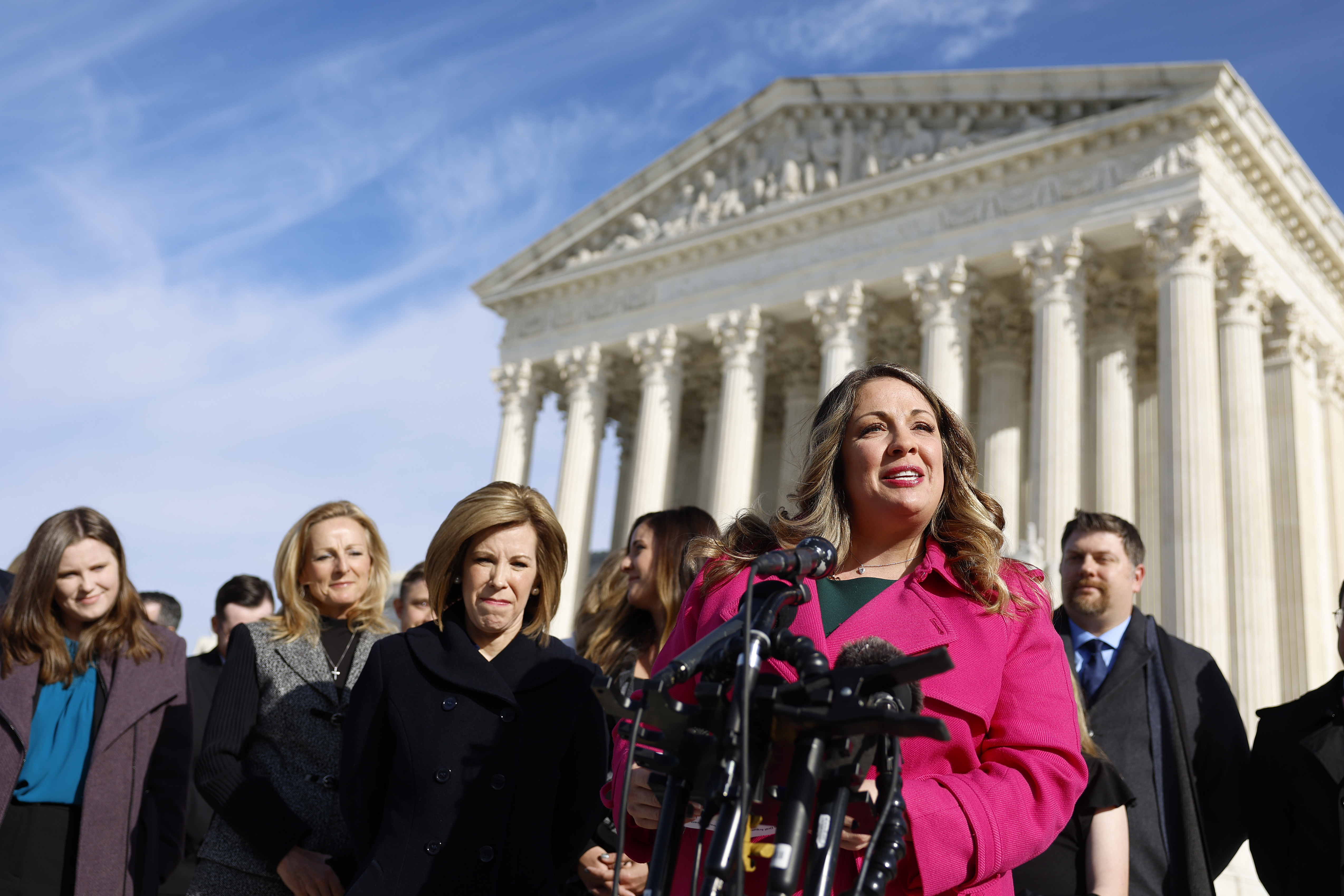 The Supreme Court’s phantom docket—the cases with phantasmal plaintiffs to help, entirely speculative wrongs to fix, or some combination thereof—returned in full force on Monday. The justices struggled with exactly what to do in 303 Creative v. Elenis, a case where social conservatives hope to limit anti-discrimination laws that currently protect LGBTQ Americans. Though the case raises a familiar constitutional question—one that the high court has touched on in the recent past—it does so in this instance while being almost entirely unmoored from any factual record or dispute.

Plaintiff Lorie Smith is a Christian web designer who sued the Colorado Civil Rights Commission a few years ago. Smith wants to offer her services to design wedding websites and said she would include a message that God called her “to explain His true story about marriage, and to use the talents and business He gave me to publicly proclaim and celebrate His design for marriage as a life-long union between one man and one woman.” She plans to decline business that would contradict that message, including for any couples whose relationships “celebrate” a marriage “that contradicts God’s true story of marriage—the very story He is calling me to promote.”

According to her lawsuit, Smith believed that her proposed wedding-design business would violate the Colorado Anti-Discrimination Act, or CADA, if it included that message. She therefore concluded that the state law violated her First Amendment rights by compelling her to create messages that ran counter to her religious beliefs. If any of this sounds vaguely familiar to you, it should: Colorado’s public-accommodations law already came before the Supreme Court in 2018, when the justices heard Masterpiece Cakeshop v. Colorado Civil Rights Commission.

That case differs from Smith’s in a few important ways. The commission had enforced the CADA against Jack Phillips, a Christian baker, after he declined to make a custom wedding cake for a gay couple. In a narrow decision, the Supreme Court ruled that the commission had violated his religious freedom and its own charge to maintain religious neutrality when members of the commission had described Phillips’ beliefs as “offensive.” That ruling let Phillips off the hook for the CADA violation while leaving the underlying law unchanged—and the supposed tension between religious freedom and anti-discrimination laws unresolved.

Smith, on the other hand, has never created wedding websites before. She does not currently create wedding websites for any customers. Nor is she bound in any meaningful way to create wedding websites after the justices deliver its ruling. In fact, the Supreme Court could deliver a ruling on June 30 next year that says enforcement of the CADA would violate her constitutional rights, and Smith could say on July 1, “You know, after the last year or so, I’ve decided that designing wedding websites sounds like too much trouble. Who wants to deal with stressed-out, overbearing couples when I could be getting a more stable customer base instead?” Unlike Phillips, her legal injury is wholly speculative and hypothetical.

Another important difference between this case and Masterpiece Cakeshop is the constitutional one. While that case rested on religious-freedom arguments, this one revolves around whether the CADA’s provisions amount to compelled speech in violation of the Free Speech Clause. Some of the news coverage of the case in other outlets has obscured the difference, portraying it as another clash between religious freedom and LGBT rights. The implications could be much broader than that. A ruling in Smith’s favor could potentially undermine anti-discrimination laws if a business or merchant could claim that enforcing it amounted to compelled speech.

Both a federal district court and the Tenth Circuit Court of Appeals upheld the CADA and the status quo, but the Supreme Court agreed to hear the case earlier this spring. The justices even scheduled oral arguments for what happened to be the fifth anniversary of the Masterpiece Cakeshop arguments. As I noted earlier this year, this case appeared poised to do what it was engineered to do: give the court’s six-justice conservative majority an opportunity to carve out exceptions in anti-discrimination laws that protect gay and lesbian Americans.

The justices routinely use hypotheticals in oral arguments. They can be useful for thinking through the real-world consequences of a potential ruling, or for unearthing any potential flaws in a legal argument by applying it to different sets of facts. But instead of forming part of the back-and-forth between justices and lawyers on Monday, hypothetical scenarios took up the bulk of the argument, largely untethered from any physical or practical reality for the parties involved.

In one exchange, Justice Samuel Alito quoted from a brief filed by a conservative law professor who suggested that, under the lower courts’ rulings, Jewish photographers could be required to take portraits for interfaith relationships, or for user profiles for JDate, or even for portraits on Ashley Madison, a site that purported to give people a way to commit adultery—all of which could violate that photographer’s religious beliefs. Colorado has argued that, under CADA, businesses can choose to not offer specific goods or services—like photo shoots for adultery websites, perhaps—but not the services it did offer on the bases of race, gender, sexual orientation, or other classifications.

Perhaps the nadir of the oral argument period came after Justice Ketanji Brown Jackson inquired whether a mall Santa could refuse to have pictures taken with Black children. Alito, a hint of bemusement in his voice, then asked whether a Black actor playing Santa “on the other side of the mall” could refuse to have his picture taken with a child in a Ku Klux Klan outfit. Beyond the inherent strangeness of this hypothetical, state anti-discrimination laws don’t include Ku Klux Klan membership as a protected status, so it doesn’t even make sense under its own merits.

The court’s conservative justices appeared broadly sympathetic with Smith’s claims—Gorsuch even echoed her brief’s claim that she faced “re-education” from the state civil-rights commission if she lost—but appeared uninterested in upending broader anti-discrimination principles. Many of the hypotheticals raised by the court’s conservatives were aimed at finding limiting principles to Smith’s argument. Justice Clarence Thomas also raised questions about the procedural means by which the case arrived at the court, perhaps leaving open a door for the justices to punt on it down the road.

Whatever the outcome, 303 Creative v. Elenis is only the latest in a series of cases that have been all but manufactured by right-wing legal activists to give the justices a vehicle to rewrite American constitutional law. Earlier this year, the court’s conservative majority ruled in favor of a high school football coach who claimed he had lost his job for holding a silent prayer. Even some of the court’s other justices disputed his factual claims in dissent, noting that he had done so in front of students in an atmosphere that other students complained about as coercive. That proved to be little impediment to the majority’s broader goals. The court could deliver a similar victory for Smith—and for itself—on its phantom docket by June.

Trump wanted to trademark ‘Rigged Election!’ and other key findings from the Jan. 6 panel’s latest release

Women Talking gives me hope for the future