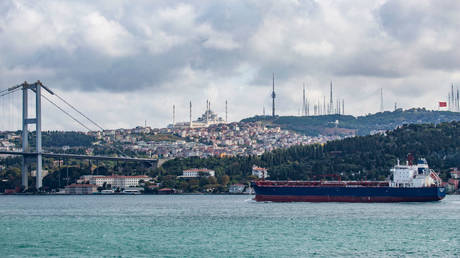 Western officials are pinning responsibility on Türkiye for the disruption to shipments of oil from the Black Sea, after Ankara stopped 22 tankers of crude from crossing its territorial waters over fears about insurance, the Financial Times reported on Thursday.

The vessels were detained days after the EU, the G7 countries and Australia imposed a $60-per-barrel price cap on Russian seaborne crude exports. The measure bans Western enterprises from providing brokerage, shipping, insurance, and other services for such oil shipments unless the cargo is bought at or below this set price level.

In November, Turkish maritime authorities issued a notice demanding additional guarantees from insurers that transit through the Bosphorus waterway would be covered starting from this month. The new requirements, expected to cover incidents such as oil spills and collisions, concern all crude shipments, not only Russian cargoes.

However, Western officials claim that Ankara’s request for additional assurances from shippers was unnecessary, and are blaming the nation for the latest traffic jam in the Bosporus Strait.

According to two Western officials cited by the media, 19 tankers loaded with crude that are currently waiting to cross the strait are carrying Kazakh-origin oil.

“These cargoes would not be subject to the price cap under any scenario, and there should be no change in the status of their insurance from Kazakh shipments in previous weeks or months,” they argued.

Manhunt Underway for ‘Armed and Dangerous’ Cop Shooter in NJ

Ahead of Labor Day, where US airlines rank on reliability this year