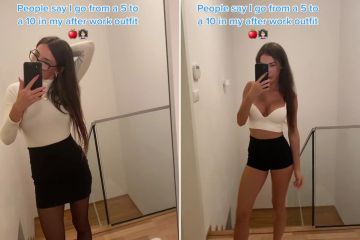 With the World Cup kicking off in Qatar tonight, a new set of glamorous wives and girlfriends have flown out to support their men.

But in recent years, the England team has been given much stricter rules for their spouses to abide by, so it’s unlikely we will see the levels of partying witnessed at the infamous 2006 tournament in Baden-Baden, Germany – when the WAGs went wild.

Their outrageous tales of drugs, dancing on tables and sky-high hotel bills rocked the quiet resort town and arguably made more headlines than the Three Lions’ performance on the pitch – they were knocked out in the quarter-finals.

Coleen Rooney was 20 at the time and yet to tie the knot with Wayne.

Already famed for her love of fashion, she was rumoured to be among the group who racked up a £57k bill after an hour of retail therapy.

It was so eventful, in fact, that the presence of wives and girlfriends was heavily restricted at the 2010 World Cup.

But Victoria, Cheryl and Coleen aside, what became of the other women?

Most read in The US Sun


Family horrified by spotting deadly beast hidden in photo… can you find it?

Then Alex had been dating Steven for four years prior to the World Cup, and was one of the WAGs to put her credit card to good use.

Now She and Steven married the following summer and are now parents to three daughters and a son, Lilly-Ella, 18, Lexie, 16, Lourdes, 11, and Lio, five.

In 2015, they relocated to the US after Steven signed an 18-month deal with LA Galaxy.

But after getting homesick, they returned to the UK the following year, and Steven has just been sacked as manager of Aston Villa.

Her outfits were said to have enraged Victoria Beckham, who reportedly felt she was stealing all the attention[/caption]

Then She became best known for taking early-morning runs past the paparazzi in skimpy cropped tops.

Her outfits were said to have enraged Posh, who reportedly felt she was stealing all the attention.

Now Carly starred on I’m A Celebrity! in 2008, but was the third person to be voted off.

She married Joe the following year and they had children Ruby, 12, Harry, 10, and Max, seven.

Following Joe’s retirement from football in 2018, the pair have both stayed out of the limelight.

Then She sang karaoke about her man at Garibaldi’s nightclub and loved the designer shopping.

She admitted to having “a thing for expensive handbags”.

Now Michaela went on to star in ITV2 show WAGs Boutique in 2007, where she tearfully announced to fellow WAGs: “Unfortunately, after four years together, we have separated. But we are still friends.”

No longer in the public eye, she is a mum to two children.

The then Spanish model began dating Frank in 2002 and welcomed their daughter Luna in 2005.

She made a name for herself in Baden-Baden after belting out Gloria Gaynor’s I Will Survive while standing on a table.

Now Elen and Frank went on to have daughter Isla, but the couple split in 2008.

The footballer is now married to TV presenter Christine Lampard, while Elen has been dating businessman Dino Costas since 2017 and  runs her own home-organisation business, La Organiser.

Then Officially the most forgiving woman in Britain, Toni stood by John after rumours of his affair with his teammate’s ex-girlfriend Vanessa Perroncel, emerged in 2010, which cost him the England captaincy.

Now Toni has twins, Summer and Georgie, 16, with John.

She enjoys horse riding and has published a fitness and healthy lifestyle book.

Nowadays Lisa is a Pilates teacher with a business degree[/caption]

Then The “quiet one” known to go a bit wild when she’d had a drink, there were rumours she’d snogged Carly Zucker after an alcohol-fuelled night out.

Now Nowadays she’s a Pilates teacher with a business degree.

Lisa maintains a low profile, but is still a constant support for Michael after they met in secondary school.

Then Just months into their relationship, Abbey flew out to support Peter.

But she was soon sent home in shame after old photos of her taking cocaine resurfaced.

Peter tried to distance himself from the drama and dumped her.

They went on to have Liberty, seven, Johnny, four, and Jack, three.

Abbey has also carved out a successful TV and modelling career.

Then Pregnant with son Jaydon at the time, Vanessa kept a low profile throughout the tournament.

Now All hell broke loose when Vanessa and Wayne split in 2009, and she was accused of having an affair with John Terry – which she denied.

Read More on The Sun

Wayne’s now married to Frankie Bridge and the pair have two sons.